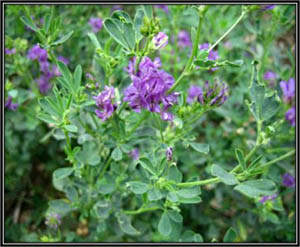 ‘Alfalfa’ is regarded as one of the most versatile herbs in alternate medicine. The botanical name of this herb is ‘Medicago Sativa’. It is commonly known as, Lucerne, Chilian Clover or Buffalo Grass while the name ‘Alfalfa’ has Latin origin, meaning- plant.

This leguminous herb has purplish flowers, clove-shaped, alternate, green leaves and grows up to a height of 50 cms. It was originally grown in Europe and other South-West Asian regions. It is now grown in places with different climatic and soil conditions including subtropical, temperate, and higher attitudes of tropical regions, including India.

This herb was discovered by Arabs who coined the terms, ‘King of Kings’ and ‘Father of all foods’. They used it as fodder for their thorough-bred horses while Persians were the earliest to identify it as a relieving grass.

Some therapeutic effects of alfalfa are:

Extracts or juice from different parts of this herb including seeds, leaves and stem are effective in relieving various ailments. Sprouts from alfalfa seeds are nourishing and delicious. They are used in salads, soups and sandwiches. Tea, brewed from seeds is refreshing and can be served with a dash of honey.

Alfalfa is a herb with astringent, cooling and sweet characteristics. It rids body tissues of toxins. It is a rich source of Vitamins A, B, D, E, G, C and K; and minerals like calcium, manganese, potassium, sodium, silicon and chlorine; essential for proper functioning of vital organs in our body. Manganese improves manufacture of ‘insulin’ essential for good digestion.

Investigations conducted by the Agricultural Department in the US have proved that alfalfa has better nutrient balance than grains like corn and wheat. It contains almost one and a half times more protein and only half the amount of carbohydrate compared to commonly used grains.

Its protein contains amino acids like lysine, tryptophane, arginine and theronine which relieve deficiencies caused by lack of essential nutrients in our diet.

This herb is a rich source of chlorophyll and dietary fibers. Nutritional authorities have conducted experiments to evaluate its use as a ‘protein-concentrate’ for supplementing foods deficient of proteins like- vegetables and as easily-digestible, ready-to-consume food.

When used as an ingredient in herbal products, Alfalfa relieves various ailments like:

People need not discontinue their standard managements to commence alternate therapy. Rather, they can use both therapies simultaneously in relieving and revitalizing oneself to feel younger and healthier.

However, it is not recommended to administer alfalfa supplements to pregnant women, patients suffering from auto-immune diseases or those being administered anti-coagulant or blood-thinning medications.

It is advisable to always consult a practitioner for the correct dosage of alfalfa supplement since an over-dose can increase photosensitivity.

SOME HERBAL PRODUCTS MANUFACTURED BY ‘PLANET AYURVEDA’ CONTAINING ALFALFA ARE: