Skip to content
View cart “Nirgundi Oil” has been added to your cart.
Sale!

Manjistha (Rubia cordifolia), is a well-known Ayurvedic tonic herb which has immense medicinal value because of its wide-ranging uses and benefits. This astringent herb is used widely in preparing Ayurvedic formulations due to its proven capability to cleanse and purify the blood, liver, and lymphatic system.

Manjistha is a perennial climber, which is also called Indian Madder or Common Madder. It is a species of flowering plant which originated in Asia, Africa and Europe. It belongs to the coffee family, Rubiaceae.

The most important part of the Manjistha plant that is commonly used for medicinal purposes is the root, which contains a red pigment. Besides the root, the stem of the plant also has medicinal significance.

The Manjistha herb contains an abundance of nutrients. Some of the main constituents of the herb include munjistin, purpurin, pseudopurpurin, and xanthopurpurin.

Manjistha has antioxidant, anti-inflammatory, anti-microbial, urolithiasis, and immune modulatory properties. It is considered as an effective blood purifier, muscle relaxant, and immune stimulant.

Manjistha possesses remarkable blood-purifying properties, which can promote healthy skin and hair by improving the circulation of blood in the body. The use of Manjistha powder can cleanse the blood by eliminating impurities or toxins. Manjistha can balance the vitiated Pitta dosha, which causes impurities in the blood and hinders its normal functioning.

Manjistha’s blood-purifying property can be beneficial for relieving a number of skin disorders, including acne, blemishes, itching eczema, herpes, dermatitis, and psoriasis. The presence of abundant antioxidants in Manjistha can give the skin a youthful appearance by reducing fine lines and wrinkles. Manjistha can also lower the levels of the ‘melanin’ skin pigment, and manage hyperpigmentation.

Manjistha contains a compound called phytochemical rubiadin, which has proven hepatoprotective effects. Manjistha powder can support the functioning of the important detox organs of the body — liver and kidneys. It can rebalance liver enzymes and offers protection to the kidneys against harmful toxins and the formation of kidney stones. It can also maintain ‘normal’ levels of creatinine and urea in the blood.

4. Promotes The Healing Of Damaged Skin Tissues And Relieves Pain

Manjistha can play a significant role in healing the skin tissues, which gets damaged due to wounds or infections. Its wound-healing actions are a result of the presence of tannins and anthraquinones. The use of Manjistha powder can notably facilitate the contraction and closure of wounds, as well as the regeneration of tissues.

Manjistha has the ability to manage painful menstruation in women. The agonizing pain which some women experience during their menstrual cycle can be alleviated with the regular use of Manjistha powder, as it can induce menstrual flow and increase uterine contractions. The use of the powder can also be useful in managing post-natal conditions which affect the uterus.

The use of Manjistha powder can be beneficial in managing benign as well as malignant cancers/tumors. Ayurveda has traditionally highlighted the ability of Manjistha to fight ovarian and uterine cancers. Due to the presence of quinones and cyclic hexapeptides, Manjistha can fight cancer cells in the colon, breast, and liver; and manage myeloid leukemia, histiocytic lymphoma, and other types of cancer.

7. Supports The Functioning Of The Lymphatic System

Manjistha can ensure that the proper functioning of the lymphatic system, which is responsible for transporting fluids throughout the body, providing nourishment to the tissues, and eliminating wastes and toxins. Since the lymphatic system is a main constituent of the immune system, the use of Manjistha powder can boost immunity and manage lymphatic congestion.

Manjistha has the capability to manage oxidative stress by keeping free radicals in check, thanks to its antioxidant properties. Oxidative stress develops due to the inability of the immune system to neutralize the free radicals generated inside the body. Since Manjistha powder can enhance immunity, it can fight oxidative stress, which eliminates diseases like Diabetes, heart disease, Arthritis, cancer, and Alzheimer’s.

Manjistha is considered an extremely beneficial herb in Ayurveda. With the word ‘Manjistha’ in Sanskrit meaning ‘bright red,’ several Ayurvedic texts have mentioned the herb’s strong affinity to the blood (rakta). The herb also has proven beneficial effects on the lymph (rasa) and hence, the immune system.

According to Ayurveda, the energetics of the Manjistha herb are as follows: the Rasa (Taste) of the herb is bitter, sweet and astringent; it’s Virya (Energy) is cooling; Guna (Quality) is heavy and dry: and Vipaka (post-digestive quality) is pungent. Manjistha is believed to be an effective Pitta pacifier herb, which also has the ability to deal with vitiated Kapha dosha.

Ayurvedic texts have described the external actions of Manjistha as Shothahara (anti-inflammatory), Vrana ropana (wound-healing), and Kusthaghna (relieving skin problems); while the internal actions of the herbpertain to its cooling effects on the nerves and the brain. In addition to the these actions, some of the other noteworthy indications of Manjistha use include Gynaecological disorders(Yoni roga),Herpes(Visarpa), Blemishes or skin discoloration (Vyang), Eye disorders (Akshi roga), Hemorrhoids (Arsha), fracture (Bhagna), and urinary tract disorder (Prameha). Manjistha also improves digestion (Pachan), and can detoxify breast milk (Stanya shodhan). 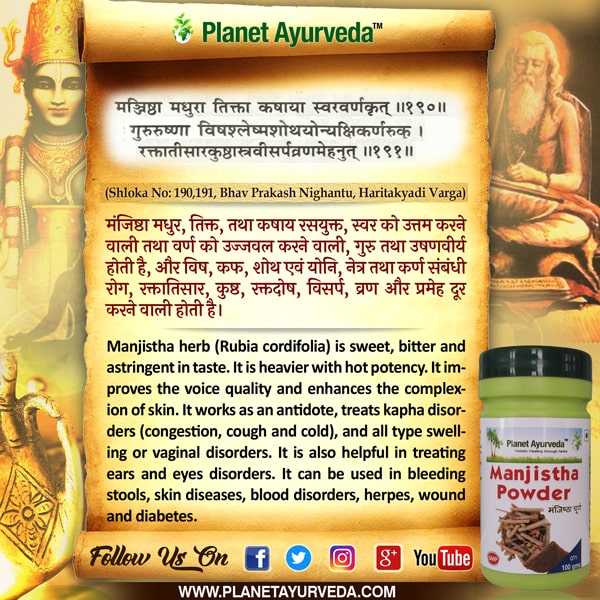 Manjistha Powder is an extremely beneficial herbal product, prepared from 100% pure and natural herbs. The powder does not contain any chemicals, preservatives, starch, yeast, artificial colors, fillers, additives, or binders.

1/2 to 1 teaspoonful twice daily with plain water after the meals Or as directed by the physician.

CONTRAINDICATIONS AND SIDE EFFECTS