Kaunch beej powder is a single herbal formulation which is made of Mucuna pruriens herb and it helps to build up or increase the fertility and improves the health and wellbeing. The positive effects of the component herbs are to act as an aphrodisiac, vitalizer, and tonic that helps in strengthening immunity and physical stamina.

Description Of The Herb

The herbal plant has value in agricultural and gardening use and has a range of medicinal properties. The tree of the herb is creeping vine and can reach over 15 meters in length. When it is young, it is almost completely covered with fuzzy hairs, as it grows older, it is free of hairs. The leaves are ovate in shape, and the sides of the leaves are often heavily lined and the tips are pointy. The stems are 2 to 3 millimeters. Kapikacchu grows all over India especially in the tropics and is also found in the tropical regions of Africa and the Caribbean.

Kaunch Beej Is Known By Other Names Also

Classification Of The Herb

What Are The Ayurvedic Properties And Ayurvedic Benefits Of Kaunch Beej?

The single herbal Kaunch beej powder has the potency to balance the three doshas Vata, Pitta, and Kapha. As the powder is made of single herb so it has all the benefits of the herb in it.

What Are The Medicinal Properties Of Kaunch Beej Powder?

It is Antidepressant, anti-inflammatory, anti-diabetic, digestive, energetic, mood swings, anti-stress by nature. Due to these properties of the powder, it is thus helpful in many health issues as mentioned below.

What Are The Indication Of Kapikacchu, Mucuna Pruriens?

How Is Kaunch Beej Powder Helpful In Increasing The Testosterone?

Kaunch beej powder has the property of aphrodisiac which contains a hormone called prolactin. Prolactin is beneficial for reproduction, metabolism and immunoregulatory functions.

What Is The Benefit Of Kaunch Beej Powder In Muscles?

This herbal powder has the property to increase the ejaculate (sperm) count in men and ovulation in the female. It also has the function to build up the nervous system and thus improve the reproductive system. Kaunch beej powder promotes the ojas and serves as a natural way to encourage a healthy sex drive and libido. It is usually taken with ashwagandha and ghee to directly target the reproductive tissues and support fertility for men and women alike.

What Is The Benefit Of Kaunch Beej Powder In The Digestive System?

This herbal powder has soothing and warming qualities which helps the on and off intestinal cramps or spasms, gas or bloating, and bowel movement. It is also considered as Rejuvenation support to soothe the vata and keep your nerves grounded and nourished.

How Is Kaunch Beej Powder Used As Anti – Parkinson?

Kapikacchu herb is considered an effective nervine tonic (tonic for the nervous system) in traditional Indian healthcare. The herb is a neurotransmitter precursor and an effective drug for treating Parkinson’s disease. The Kapikacchu or Mucuna pruriens formulations have a higher bioavailability than standard L-dopa preparations.

How Is Kaunch Beej Powder Works As An Anti-Aging?

As the power is a single herbal formulation so all the properties present in the herb are present in powder. The herbal powder has a lot of dopamine in it, this compound stimulates the pituitary gland and maintains healthy hormones throughout life. Thus it helps to maintain the level of growth hormone. As this herb is very useful and helps in removing body weaknesses and it helps to increase the hormones which makes our body look young.

How Is Kaunch Beej Powder Helpful In Mood Swings?

The L-dopa present in Kaunch beej powder increases dopamine in the brain cortex. This hormone controls and manages the mood.

How Is Kaunch Beej Powder Helpful In Healthier Functioning Of The Brain?

This herb powder is very beneficial for the health of the brain. The properties of the powder make the brain healthier by controlling neural and cognitive activities. It helps in improving nerve function and reducing the Parkinson’s disease.

The use of Kaunch beej powder is highly beneficial in the treatment of depression and insomnia. 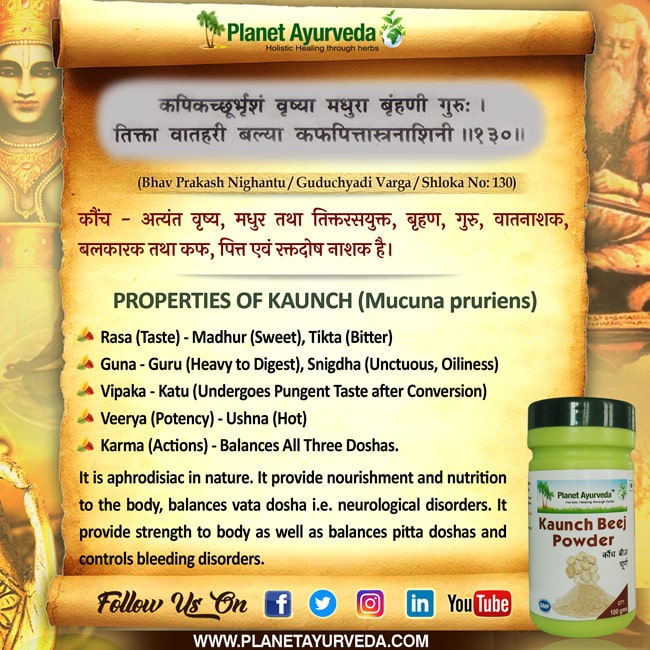