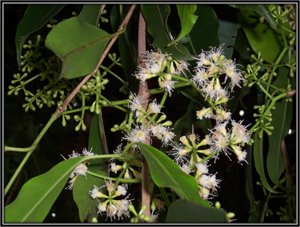 The common names used in English for Syzygium cumini is Indian Blackberry, Jambul and Java Plum. The common name used in Hindi is Jamun and in Sanskrit is Jambu. It belongs to the family of Myrtaceae. This herb has a rich history of use in India. It is grown in England as well. It is a native to Bangladesh, Pakistan, India, Nepal, Indonesia and Philippines. Sometimes it is confused with blackberry.
It was first introduced to the US in 1911; it was commonly grown in Suriname and Trinidad and Tobago. From there onwards this plant is cultivated in numerous countries and different regions. It was introduced in Brazil during the Portuguese colonization.

It is an evergreen tropical tree, it has a dense canopy. This tree can grow up to 50 m. The bark is brown in color and has smooth and exfoliating hard woody scales. The leaves can be long, smooth, shiny and have a distinct aroma. The flowers are greenish white and fruits are black and plum like. They contain a pink colored pulp and are accompanied by a single seed.
The herb has many traditional as well as modern uses. The fruit of Syzygium cumini can be used to relieve diarrhea and can be eaten to remove the symptoms of diabetes.

Various parts of Syzygium cumini are used, such as bark, fruit, seed and leaves. Almost all the parts of the tree have been used in traditional medicine. The bark and seeds of the tree are known for their popular anti diabetic agents. The bark is known to freshen up the mouth and is also used to relieve disorders of the gums and the teeth.

Various triterpenes, sterols, flavonoids and phenolics have been found in the bark. Fatty acids, monoterpenoids, carbohydrates and phenolics are known to be present in the seeds.
The fruit pulp contains essential vitamins and minerals such as calcium, iron, potassium, vitamin A, thiamin, riboflavin, nicotinic acid and ascorbic acid. The leaves and fruit contain crude protein 9.1%, fat 4.3%, crude fiber 17%, ash 7%, calcium 1.3% and phosphorus 0.19%.

Syzygium cumini has been used for medicinal purposes since ancient times. Some of the ailments this herb can help relieve are:

No harmful side effects of Syzygium cumini have been reported. However, it is better to avoid the use of this herb during pregnancy and breast feeding.
Blood sugar levels should be closely monitored if the patient has diabetes. If you have scheduled a surgery, it is better to stop using Syzygium cumini at least two weeks before.
Before using any herb it is advisable to consult a physician.

PLANET AYURVEDA PRODUCTS THAT USE THESE HERBS

Though Planet Ayurveda does not use Syzygium cumini in any of its products, it has other herbal supplements that are very effective in relieving some of the conditions that can be relieved by Syzygium cumini. These are:-