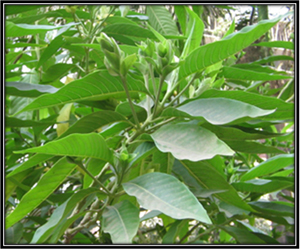 Adhatoda Vasica is a herb, also popularly known as Malabar Nut in English, Adosa in Hindi and Vasaka in Sanskrit. It has been used in preparation of herbal medicines for the past 2000 years. Yogic practitioners often use this herb to clear their respiratory tracts during the course of breathing exercises.

The herb reaches 1300 meters in height and is grown throughout India on wastelands in different habitats and different types of soil. It is grown in other countries like Sri Lanka and Malaysia as well.

This evergreen perennial shrub has leathery leaves. The flowers are dense and large having large bracts and whitish pink/purple colored.

The herb is often grown as a hedge and its leaves and twigs are utilized as green-manure. The whole plant or its roots, leaves, bark and flowers are used in various herbal preparations.

In ayurvedic medicine, Adhatoda is mainly used to relieve respiratory disorders and cough. The leaves of Adhatoda Vasica are rich sources of carotene and Vitamin-C.

In some parts of India like Bihar, a decoction from the leaves is used to induce abortion and facilitate child-birth. The Khasi tribe in India cooks the leaves and vegetables to prepare a delicious vegetable.

Herbal practitioners in Europe use this herb as a febrifuge, antispasmodic and expectorant.

Adhatoda Vasica contains certain components which make it a sought after herb in traditional medicines including:

Experimental studies have proven therapeutic effectiveness of Adhatoda Vasica through various activities like:

The rhizomes and leaves of Ahatoda vasica are used to relieve:

This herb should be avoided during pregnancy except at the time of birth since it contains oxytocic which stimulates utrine-contractions and abortifacient which induces abortion. Avoid consuming large doses of adhatoda since it can cause irritation in the alimentary canal, vomiting or diarrhea.

Adhatoda Vasica is found in the following Planet Ayurveda products: