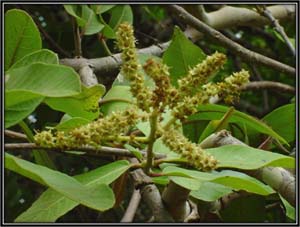 Terminalia Arjuna, a tree with medicinal value is commonly known as ‘Kahu’ in India. Ancient Sanskrit Scriptures refer to it as, ‘Nadisarija’ and mention use of its bark as a cardiac tonic.

Its English name is ‘Arjun Myrobalan’ and is commonly known as ‘Arjun’ in Hindi and ‘Arjuna Kakubha’ in Sanskrit. This tree is usually found along marshy lands and water bodies.

Arjuna Tree is found in the Sub-Himalayan and Deccan regions of India; parts of Sri Lanka and Myanmar.

Arjuna tree is large and evergreen and reaches 20 to 27 meters in height. It has a buttressed trunk with smooth, pinkish grey bark which exfoliates in thin and large sheets and round, conical leaves. The bark oozes whitish fluid when cut. The fruits are ovoid-oblong measuring two to five centimeters in length. Its bark and fruits are used in various herbal preparations.

Vagbhatta, the ancient Indian physician prescribed the bark for relieving heart diseases. Chakradatta, another ancient physician prescribed it as an astringent and tonic for heart disorders. He administered it in a decoction form with treacle water and milk or in a preparation using clarified butter or ghee.

Some Therapeutic Effects Of Terminalia Arjuna Are:

The bark is a cardiac stimulant and has tonic and cooling effects. Ayurvedic medicines practitioners prescribe preparations containing it for dropsy or cardiac failure.

Experimental studies have proven therapeutic effectiveness of Terminalia Arjuna due to its components like:

Practitioners prescribe it as a cardiac tonic owing to its stimulating action on our heart. The bark in decoction or powder form is used to relieve many ailments, internally and externally such as:

Terminalia Arjuna is beneficial to our health when administered in recommended doses. Consult a practitioner before commencing its administration either separately or in combination with standard managements.