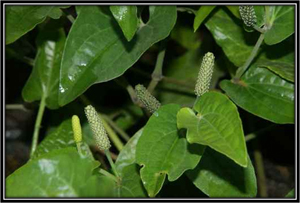 The Piper longum is commonly known as Long pepper. It is known as Pippali in Hindi and Sanskrit. It belongs to the family of Piperaceae.
This herb has long been used in medicines and as an important culinary additive in parts of India, Sri Lanka, Middle East and the Americas. It has now become extremely popular in Europe, America and is hence traded from India widely. It is also believed that Piper longum was given more value than the black pepper by Roman Emperors.
In recent times long pepper has become a rare ingredient in the European style of cooking but it is still being widely used in India for the preparation of pickles, in America for making spice mixtures and in Indonesian as well as Malaysian cooking.
The Piper longum is native to Southern parts of Asia and is found wildly throughout the hotter parts of central India, Malaysia, Singapore, Bhutan as well as Myanmar.

DOSAGE OF THE PIPER LONGUM

The powdered fruit as well as the root of the Piper longum must be consumed between the limits of 500 mg and 1 gms.

CHARACTERISTICS OF THE PIPER LONGUM

The Piper longum is a slender aromatic perennial creeper that has woody roots. This plant has wide ovate and cordate leaves. The inflorescence of the plant is cylindrical with pendunculate spikes. The female flower can grow up to 2.5 cm long and 4 to 5 mm in diameter. The male flowers on the other hand are large in size and more slender. The fruits of the Piper longum are small and have ovoid berries. The shiny blackish green fruit has embedded spikes which are peculiarly fleshy.

The immature spikes and the roots of the Piper longum are used widely across the globe.

THERAPEUTIC POWERS OF THE PIPER LONGUM

The dried fruit spikes of the Piper longum are used extensively for flavoring. This herbal plant is considered to be an effective stimulant, laxative, stomachic as well as a carminative. The berries of the Piper longum are also consumed with honey to relieve the problems of asthma, cough and sore throats. The roots of the Piper longum work as stimulants and are known for relieving patients of gout, lumbago as well as rheumatism. The entire plant is considered to be a boon by tribal clans in India for its usefulness in relieving spleen disorders, dysentery, asthma, cough, bronchial infections and cholera.

AYURVEDIC PROPERTIES OF THE PIPER LONGUM

The herb is known for relieving various diseases because of the following properties:

The Piper longum is usually considered safe for use and is thus added to foods. However the fruits of the Piper longum must be consumed in moderation as they have the properties of acting like a contraceptive. Lactating as well as pregnant women must avoid the use of this herb. Prolonged use of the herb can also cause infertility. It is advised to consume the herbal plant only after consulting a certified herbalist.

The Agnitundi Vati produced and recommended by Planet Ayurveda contains this medicinal herb. The benefits of this herbal decoction have been explained in detail:

We at Planet Ayurveda are constantly working on formulations that will help people the natural way. The products we produce are subjected to high quality check standards that have been set up after thorough research and study. The products we produce do not contain any preservatives and are made from organically grown ingredients only. We are also proud to say that none of our products have been tested on animals.