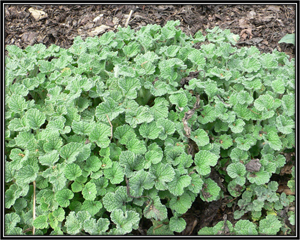 Marrubium Vulgare is commonly known as Horehound and white horehound. It is native to Asia and Europe. This perennial fragrant herb belongs to the mint family. The plant grows to a height of 3 feet and the leaves are white as well as extremely wooly. The horehound has small flowers that are white in color and they bloom between the month of June and August.

The leaves and flowers of the plant have been long used as a home remedy for relieving common cold. They are now used in liquors, candies as well as cough drops. This additive is also used to relieve parasites. Another very popular use of the herb is as a diaphoretic and an effective diuretic.
The plant of Marrubium Vulgare is used in candy making. The herb is crushed and made into hard lozenge candies that have been used for years to improve digestion, relieve inflammation and relieve sore throats.

Marrubium Vulgare is also an invasive weed that was introduced in southern Australian region in the end of the 19th century. It became a wildly growing weed in native grasslands where it was introduced and was declared a noxious weed. It is known to occupy place in overgrazed grounds.
The plant is also used as a natural repellant for grasshoppers.

THERAPEUTIC POWERS OF THIS HERB

The horehound is a fragrant herb that is used widely in folk medicines. It is often known to be used as an expectorant. The plant contains marrubin which helps in influencing the bile secretion. According to recent studies the herb contains hypoglycemic effects on the body.

This herb is helpful in relieving the problems like:

The entire plant of Marrubium Vulgare belongs to the family of Lamiaceae and is used widely to relieve menstrual problems. It is an expectorant and is helpful in relieving respiratory disorders. The leaves of the plant are used to provide relief in case of burns, inflammation and wounds. A tonic created from the plant is used to relieve problems of the stomach. Horehound powder is used to relieve digestive problems and control blood sugar levels. The juice made from Marrubium Vulgare can be useful in relieving problems of cold.

The herb must be used only after consulting a certified herbalist.

Currently there are no Planet Ayurveda Products that use this herb as an ingredient in them; however, the below mentioned Planet Ayurveda products are useful in some conditions for which Marrubium Vulgare is used:

We at team Planet Ayurveda are committed in providing the best to our customers. We are working hard to formulate and test natural remedies that will be useful in combating various common diseases. We are proud to state that none of our products have been used or tested on animals. All the products that the team of Planet Ayurveda recommends to its customers are absolutely free from any kind of chemical additive. We are highly focused on the quality of the product and hence have set up an internal quality checking mechanism.

This mechanism set by us helps the company to regulate and monitor the quality of the products that are offered to the clients. We also ensure that each of our products is made from only organically grown ingredients. Our products are natural and healthy. They can be consumed by people of all ages.