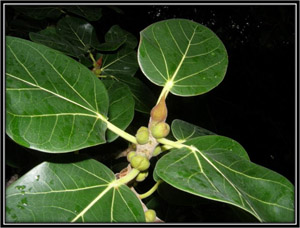 The herb Ficus benghalensis belongs to the plant family Moraceae, the order Rosales, the Genus Ficus (as is indicated by the name) and the subgenus Urostigma.
It is commonly known as the Banyan Tree in India.

In earlier times, traders and businessmen used to frequent the shade of this tree while travelling. These traders were referred to as ‘Baniyas’ and that is how the tree got its Indian name. It has been found throughout India since times immemorial but for long people did not know about its therapeutic values. Its name comes up in majority of the songs and poems of olden times. It can also be found along roads and pathways across the country.

The tree is native to India and grows all over the country.

The fruit of the Banyan tree, its leaves, as well as, its bark contain certain medicinal properties and are used for various purposes. The latex is also very widely used. The bark and the leaves come in handy in controlling bleeding or secretion and its latex has a very relieving effect on the skin as well as the mucus membrane. It lessens pain and swelling and also is rich in nutrition.

The Banyan Tree is famous all over India as the tree with aerial roots. It has a distinct trait where all its branches, after growing to a certain length, drop down to the ground, take roots again and then branch out again in different directions. This subsequently increases the growth of the tree indefinitely.
Its leaves are shiny, smooth and oval in shape and quite leathery to touch. The fruits, as well as, the flowers of the plant are very small in size and mostly grow in clusters.

Ficus benghalensis has found many uses as a medicinal herb. It can be used internally or as a preparation that can be applied externally.

USE OF FICUS BENGHALENSIS IN AROMATHERAPY

The parts of the Banyan tree have found no significant use in Aromatherapy till now.

Precaution should be exercised while using the latex of the plant as it is toxic in nature. The leaves and the bark of the tree are however, safe to consume and seldom have been reported to cause any side- effects.

Although none of the Planet Ayurveda products have Ficus benghalensis in them; our Detox tea contains Ficus Religiosa.

We at Planet Ayurveda give the best advice possible with regard to herbs, herbal supplements and Ayurvedic medicines. All these products are made from 100 percent natural ingredients and vegetarian. We proudly claim that none of our products are used on animals. For better health, choose Planet Ayurveda products.