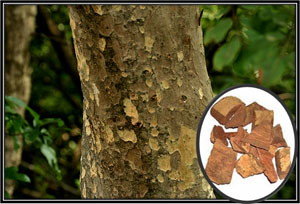 Arjuna Tree is known as Nadisarjja in Sanskrit. The common names used in India are Arjuna and Kahu. It has been used in Ayurvedic medicines for the past several centuries. The bark of the Arjuna tree is used for relieving heart diseases. It is found to be exceptionally effective in relieving various heart ailments.

The botanical name for Arjuna tree is Termanalia Arjuna. Arjuna tree is native to India. It is widely found in the Deccan region, sub-Himalayan tracts, Srilanka and Myanmar. It is usually grown in marshy areas and along water bodies.

Several studies are being carried out to understand the power of Arjuna tree in recent times.

Terminalia Arjuna is a deciduous, tall tree which reaches up to 60 feet height. The bark of the tree is soft and thick with gray colour on the outer surface and reddish tinge inside. It easily flakes off in flat large pieces. The leaves of the tree are oblong in shape and flowers appear in clusters. It has small oblong fruits. A milky juice comes out when the bark is cut from the tree.

The bark of the Arjuna tree works as a cardiac stimulant. It is beneficial in arresting bleeding. It also helps in reducing fever. Stones or calculi formed in the kidney or urinary system can be expelled with its usage. Flow of bile juice is promoted and it also fastens the relieving of wounds.

The bark of the Arjuna tree contains higher quantities of calcium and in small amounts magnesium, aluminium and tannins are seen. Lactone, arjunine a crystalline compound, arjunetin essential oil and sugars are present in the bark of the tree.

Because of the presence of flavonoids and glycosides, it has anti-oxidant, anti-inflammatory, lipid lowering capacity and works like a cardio tonic. It has been observed in rodents that the antioxidants protect the tissue of the heart from damage.

Tannins from the bark are used in the manufacturing of ink and leather.

The adverse effects of the Arjuna herb are not fully known. But it is preferable to use the herb in limited quantities. There is a possibility of damage to liver or reduction in thyroid activity if taken in higher doses. It is better to consult a registered medical practitioner before administering any herb or medicine.

It is our constant endeavour at Planet Ayurveda to provide natural and quality herbal products. All our products are made with 100 percent vegetarian and natural ingredients which undergo several quality checks before they are packed. We never believe in testing our products on animals. Please choose the products of Planet Ayurveda for a happy and healthy living.