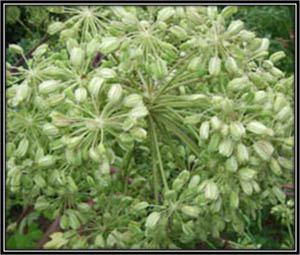 The herb belongs to the family of Apiaceae (Umbelliferae).

The species of the Angelica herb are:

The Angelica herb is also colloquially known as wild celery and masterwort.

The Angelica herb is extracted from a short living, perennial plant that is known to be extremely aromatic. The physical characteristics of this plant include hollow stems, thick, long, as well as, deep diving leaves.
This plant is known to have very small white green flowers and ridged seeds. The major parts of the plant that are used to make the therapeutic herb are the leaves, roots, seeds, oil and also the stems.

The Angelica herb is a powerful plant that is known to relieve a number of diseases. It is a natural pain reliever and hence, has no chemical side effects on the human body.
This natural therapeutic herb is an important element of the Ayurvedic or naturopathy history and has worked wonders for people who complain of muscular pain and cramps.

The oil of this plant contains Monoterpenes which makes it highly volatile. It contains a wide variety of glycosides and coumarins.

This medicinal herb is used to relieve and relieve a number of internal health issues.
Some of which are flatulence, stomach cramps, chologogue effects and allergies. This herb is also suggested for use for stimulating the secretion of gastric juices, reducing menopausal syndromes and for minimizing any kind of muscular spasms.
According to Chinese medicinal studies the Angelica herb is known to relieve all kinds of menstrual discomforts. This Phytoestrogen is widely used to balance the levels of estrogen in the body. This balancing act of estrogen levels is known to help in fighting the menopausal issues and address the problem of hot flushes particularly.
This herb is known for acting like a boon for a patient suffering from any problem related to the functioning of liver such as chronic hepatitis and cirrhosis.
Angelica helps in dilating coronary blood vessels and helps in relieving vasospasm. This herb is known to have nearly double the amount of analgesic as compared to that in aspirin. This natural therapy for headaches, arthritis and cramps has been popular amongst the natives of Asian Countries.

A FEW OTHER POPULAR USES OF THE ANGELICA HERB ARE AS FOLLOWS:

The beautiful smell of this herb makes it popular choice for an additive of essential aroma oil. The use of the angelica perfumed plant in aromatic oils is an age old practice. The sweet fragrance of Angelica can instantly change ones mood and act as a natural therapy for relieving stress. The herb provides a boost to the lymphatic system and also has exemplary anti-fungal properties.

Currently there are no Planet Ayurveda Products that use this herb as an ingredient in them; however the below mentioned Planet Ayurveda products are useful in some conditions for which Angelica is used:

It is always better to take herbal medication under guidance from a certified practitioner. We at Planet Ayurveda offer the best management advice and prescribe herbs, supplements and Ayurvedic medicines made from 100 percent natural ingredients that are completely chemical and preservatives free. Our products are vegetarian and made from the best quality organic herbs. We are proud to proclaim that our products are never tested on animals. Opt for Planet Ayurveda herbal products and enjoy the health benefits in everyday living.