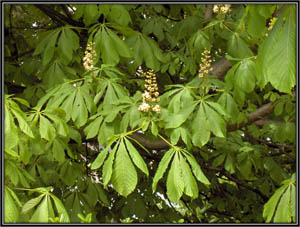 Though generally found in the mountain forest ranges, Aesculus trees are now cultivated in several not-so-hot-regions for their beautiful flowers. Deciduous in nature, the Chestnut tree can grow as high as 75 feet; while the tree generally flowers by late spring its fruits ripen by autumn. The leaves of the chestnut tree are palm-like, its buds sticky and its flowers are white with slight pink and yellow spikes. The chestnut fruit resembles a green-brown capsule with spikes and its size may vary from 2-5 centimeters in diameter. The chestnut fruit, often referred to as a nut or conker, may contain 1-3 red-brown seeds.

The use of Aesculus in traditional medicine dates back to centuries. The barks, seeds, flowers and leaves of this tree are used in manufacturing of several medicines as well as cosmetics.

Some of therapeutic uses of this tree are:

Ripe seeds of the chestnut tree comprise of 3 percent water, 5 percent oil, 11 percent crude protein and 74 percent carbohydrates. The primary constituent of this herb is aescin; aescin is a mix of saponins that contain anti-inflammatory properties as well as help stimulate blood.

Some of the ailments that extracts from Aesculus trees help relieve are:

In addition patients suffering from medical conditions like kidney and liver disease, heart problems and blood clots should only consume medicines made from horse chestnuts after consultation with their doctors. Pregnant and lactating women should avoid consuming products containing horse chestnut extracts.

Before using any herbs it is advisable to consult a medical practitioner.

PLANET AYURVEDA PRODUCTS THAT USE AESCULUS

Currently there are no Planet Ayurveda Products that have Aesculus as an ingredient in them; however the below mentioned Planet Ayurveda products are useful in some conditions for which Aesculus is used: