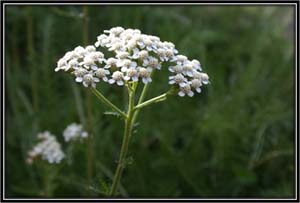 Achillea Millefolium is commonly known as yarrow or common yarrow. It is a flowering plant that belongs to the family of Asteraceae. It is native to the temperate regions of Northern Hemisphere majorly in Europe, Asia and North America. In Colorado and New Mexico it is known as Plumajillo. This is because of the shape of the leaf and its texture. It is used to control flow of blood from wounds. The other common names of the plant are thousand leaf, thousand seal, sanguinary, milfoil, gordaldo, old man’s pepper and devils nettle.
The plant has been used in the culinary world for decades. The young leaves of Achillea Millefolium are usually cooked with spinach or are consumed in a soup. They are also used as a dry herb.

Achillea Millefolium is a herbaceous perennial plant that produces several stems that are around 1 meter in height. They have rhizomatous growth form. The leaves are distributed all across the stem. It has various degrees of pubescence and measure five to 20 cm in length. The leaves are either bipinnate or tripinnate and resemble feathers.
The inflorescence of the plant has around 4 to 9 phyllaries that contain ray and disk flowers. These flowers are either white or pink in color. They are generally three to eight flowers together. The disk-like flowers range from 15 to 40 in number. The plant has fruits and has a sweet strong fragrance that is similar to that of chrysanthemums.
These plants usually grow 3500 meters or 11500 feet above sea level. Also the plant flowers between the month of May and June in mildly distributed soil grasslands as well as forests areas. It is majorly found in North America.

The herb is known to be a diaphoretic, tonic, and stimulant, aromatic and astringent. This relieving herb has relieving properties and is used on wounds, cuts as well as abrasions.
The blue colored essential oil that is extracted by the method of steam distillation from the flowers is known to be an effective anti inflammatory agent. It is usually rubbed on the chest for providing relief to patients suffering from cold or influenza.

The herb is biter tasting and a stimulant which is used as a tonic. It arrests the problem of bleeding and induces copious perspiration.

It is a proven effective remedy for relieving:

The herb can cause severe allergic reactions on the skin. Prolonged use can also increase the skin’s photosensitivity levels. According to a study the aqueous extract of the herb can impair the sperm production in men.

The best substitutes offered by the team of Planet Ayurveda for Achillea Millefolium are:

We at Planet Ayurveda provide the best to our customers. We do not use any chemicals or preservatives in our produce. We have high quality levels and use only organically grown natural ingredients. We neither practice nor endorse the idea of testing the products on animals.