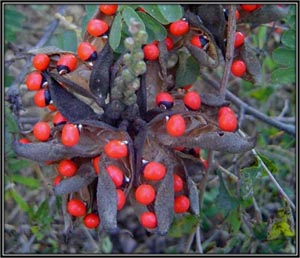 The robust plant of Abrus Precatorius is also known as Indian liquorice, Crabs eye and Jequirity. In Hindi it is called Rati and in Sanskrit it is referred to as Gunja. This plant has been known to be a critical element of Indian, as well as, Chinese medicinal cultures.

This plant is native to the Himalayas in India and is also found in a few parts of Southern India. Today, the Abrus Precatorius is also being harvested from Hawaii, southern parts of America, West Indies, as well as Africa.

The seeds of this plant are small, scarlet in color with black spots around the hilum. The stout of the plant is rectangular in shape and has brownish pods that usually ripen after the winter season. The root of Abrus Precatorius is woody and has a lot of branches.

The main parts of the plant, used to develop medicines are its seeds. It has the following therapeutic properties:

The roots, seeds and the leaves of this herb are used for medicinal purposes in Ayurveda. This plant is known for being beneficial for the hair as well as for relieving acute cases of ulcer. According to studies, a single dosage of this plant is said to be beneficial in regulating 13 menstrual cycles.

Various parts of this plant are used in a number of countries. Some of them are as follows:

Abrus Precatorius has several reliever properties. Some of these are:

In addition, there are a large number of ailments that can be relieved by the use of this medicinal plant. Some of them are gangrene, cellulites, cholera, snake bites, dysentery, hypertension, keratitis, inflammation, conjunctivitis, epilepsy as well as typhoid.

The seed of Abrus Precatorius is known to be extremely poisonous when taken without proper prescription. Its high toxic levels can cause severe stomach cramps, diarrhea, tachycardia, coma, cold sweats and nausea. Prolonged use of Abrus can lead to anemia and can increase the white blood cell count tremendously. It is therefore best taken under professional guidance and avoided by pregnant women and infants.

Currently there are no Planet Ayurveda Products that use this herb as an ingredient in them; however the below mentioned Planet Ayurveda products are useful in some conditions for which Abrus Precatorius is used: