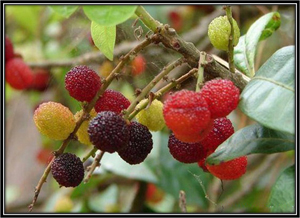 The herb Myrica Nagi belongs to the plant family Myricaceae and the order Fagales. It is also called the Myrica Esculenta. This herb is commonly referred to by the name Kaiphula in Sanskrit and Box Myrtle and Bay Berry in English. In Hindi, it is known as the Kafal.

The bark that grows on the tree Myrica Nagi is aromatic in nature and owing to it; the tree has been in use for its aromatic properties for ages.

The plant Myrica Nagi is native to the Hilly regions of the countries Nepal and India. It is found extensively in the northern region of India, especially in the state of Punjab. It also grows wildly in the Garhwal and Kumaon region.

The only part of the tree that has therapeutic value and is used for medicinal purposes is its bark. The bark of Kafal contains Myricitrin which kills bacteria and so the bark is used for arresting bleeding, removing wind from the stomach, arresting secretion, stimulating bile, and for the retention of potassium in the body. It is also used as an anti- septic.

The tree Myrica Nagi can grow up to 10 meters high and the leaves are long and either pale or rust- colored. The tree has many hairy branches. The flowers that bloom on them are few and far apart and quite small in size as well. The seeds of the plant own a wrinkled appearance.

The herb Myrica Nagi has found many uses as a medicinal herb. It can be used internally or as a preparation that can be applied externally.

USE OF MYRICA NAGI IN AROMATHERAPY

The oil that is extracted from the bark of the tree Myrica Nagi is used in various perfumes, tinctures and oils that are used in Aromatherapy.

Although Myrica Nagi is a herb that is very safe to use, it should not be consumed before taking advice from a medical practitioner. It is wise to consult a doctor or a practicing medicine man before going ahead with the process of taking in any sort of herbs or herbal extracts. Planet Ayurveda provides customers with the option of obtaining medical advice from their medical practitioners online. Also, all products at Planet Ayurveda are 100 percent vegetarian; contain only herbs and have never been tested on animals.

Dosage – For best results one to two teaspoons of this churan can be had twice a day.