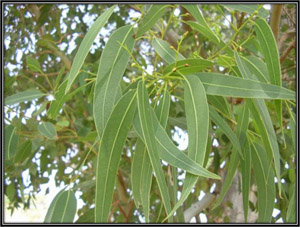 The botanical name of Blue Gum Tree or Australian Fever Tree is Eucalyptus Globulus Labill. In Hindi it is known with the name Nilgiri and the Sanskrit name is Tailpama.
This tree is native to Australia where Kolas feed on the leaves of Eucalyptus tree. It soon spread to other traditional medicinal systems like Ayurveda, Unani, European and Greek.
At present eucalyptus oil is used in several over the counter cold and cough formulations useful for relieving congestion. It is also used widely in creams and ointments for reducing joint and muscle pain.

It is believed that Tipu Sultan first brought Eucalyptus tree to India in 1790. It is widely grown in the Nilgiri hills of south India. The tree is considered as one of the tallest and fastest growing trees in the world.

It is a deciduous tree which reaches a height of around 40m. The bark is silver-grey in colour and the trunk is twisted. Mature leaves of the tree are relatively narrower, asymmetrically rounded and glossy green in colour. Flowers are solitary seen on short pedicles. Fruit is round around 3 cm long, tapers towards the base. Eucalyptus oil is obtained by the process of steam distillation of fresh leaves and branch tops.

Bark, leaves and oil from the eucalyptus tree are used for medicinal purposes.

This herb has several relieving powers; some of them are as follows:-

Eucalyptus oil is an essential ingredient in Aromatherapy managements and is used for improving concentration. The oil is effective in relieving pain and muscular aches and also works efficiently in controlling colds, flu, sinus, asthma and coughs. It shows positive effect on urinary tract and works on skin infections like herpes, wounds and cuts.
It is effective in relieving congested skin. The oil has anti-rheumatic, analgesic, anti-spasmodic, antiviral, cicatrisant, deodorant, expectorant, insecticide, stimulant and rubefacient properties.

SAFETY PRECAUTIONS AND SIDE EFFECTS IN USING EUCALYPTUS GLOBULUS LABILL

People suffering from high blood pressure and epilepsy should not use Eucalyptus oil. The oil and the extracts should be used in low concentrations. Excess usage may lead to headaches, convulsions and delirium.

Currently there are no Planet Ayurveda Products that use this herb as an ingredient in them; however the below mentioned Planet Ayurveda products are useful in some conditions for which Eucalyptus Globulus Labill is used: