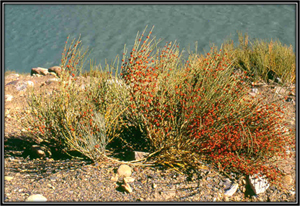 Ephedra is commonly known in Hindi as Asmania. The Sanskrit name is somlata.
This plant is indigenous to India. It is also grown in China and Pakistan.

Young branchlets and stems of the plant are used as a medicine.

It is a shrub which is a perennial plant which grows up to a height of four feet. The plant beats yellow-greenish branches which are slender and cylindrical and has underground runners. The tree produces fleshy, poisonous red cones which look like berries.

This herb has several relieving powers; some of them are as follows –

The herb contains ephedrine which is a phenylethylamine alkaloid, flavonoids, lignans, catechols and polysaccharides. The root of the plant contains spermine alkaloids, procyanidins and tyrosine derivatives.

SAFETY PRECAUTIONS AND SIDE EFFECTS IN USING EPHEDRA GERARDIANA

The usage of Ephedra under medical supervision is advised. Over dosage may lead to side effects like restlessness, anxiety, headaches, insomnia, vomiting, nausea and urinary problems. Pregnant women, lactating mothers, persons who take medications for depression and high blood pressure should not use Ephedra.

As of now there are no Planet Ayurveda products which use Ephedra. But the below mentioned products have similar properties as that of Ephedra.

All our Planet Ayurveda products are manufactured with 100 percent natural and vegetarian ingredients, without any chemicals or preservatives. We rely on ancient Ayurvedic texts to prepare all the medicines. We do not encourage testing of our products on animals. All the medicines and herbal supplements undergo quality checks at various levels.