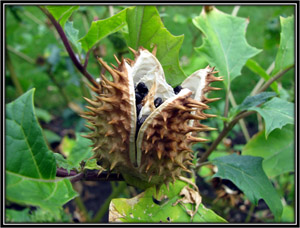 The Datura Stratumonium belongs to the family of N.O.Solanaceae. The other names of the plant are stramonium, Datura, Jamestown weed and Devils apple.
Datura is mentioned in the ancient indian literature as Shivashekhera because its flowers are associated with Lord Shiva. This plant has been a part of Indian ayurvedic medicinal history for centuries.
The plant is known to be an intoxicant, containing emetic, relieving and digestive powers. The smoking of Datura seeds is known to be used as a management for Asthma majorly.

Datura is a bushy plant that grows up to the height of 1 metre. It has large egg shaping leaves and very big sized flowers. The plant has egg shaped fruits that are covered in prickles. This plant is indigenous to Indian and usually grows in temperate Himalayan region at a height of 2500 metres.
D.stramonium has a weird smell that is errect and freely branching. The root of the plant is long, white in color, fibrous and thick. The stem is erect, leafy, pale yellow green in color and smooth. The leaves are 3 to 8 inches long and toothed. The upper surface of the leaf is dark green and the inner side is light green. The leaves taste bitter and cause nausea. This plant flowers in summer and has fragrant flowers. The calyx is long and has swollen at the bottom.

The leaves and seeds of the Datura Stramonium have been used in Pharmacopoeia as an antispasmodic for patients who suffer from critical conditions of asthma and wheezing. The plant possesses properties similar to that in belladonna. The plant is also used to induce sleep.
The datura has an active anti asthmatic agent called atropine which causes the paralysis of the pulmonary parts of the lung. This eliminates the spasms that are responsible for causing asthma attack. The smoking of Datura has been practiced for centuries.
The chinese use this herb as a form of anaethesia and Zunis use it as an analgesic.
The other medical usages of the plant include providing relief from tooth pain and bad throat conditons. It also helpful for patients with glaucoma, enlarged prostrate, heart troubles, urinary problems or bowel obstructions.

The leaves of the Datura contain alkaloids. The plant seeds yield a large amount of diploid I and tetraploid II as well.

Datura Stramonium is used to relieve the following ailments:

SAFETY AND PRECAUTIONS TIPS FOR USING THIS HERB

Datura is poisonous and hands should be washed properly after handling it. The mixture of the Datura should not be used on children. The normal dosage of the plant is about 2 decigrams only. Excessive consumption of it can lead to dryness in mouth as well as the throat.

PLANET AYURVEDA PRODUCTS THAT USE THE HERB

Currently there are no Planet Ayurveda Products that use this herb as an ingredient in them; however the below mentioned Planet Ayurveda products are useful in some conditions for which Datura Stramonium is used:

We at Planet Ayurveda are continually working to provide the best products world over. Our chemical free products have helped patients in recovering from diseases in no time. We have been appreciated for using organic and herbal ingredients in the products. We are proud to state that we do not test any of our products on animals. Our team suggests the ideal product only after carefully studying the case history of the client. We have been able to make a mark in the industry due to our continous efforts of providing nothing less than the best.