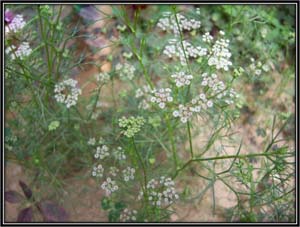 It is also known as Omum in English; Ajwain in Hindi and Yavanika or Agnivardhana in Sanskrit. ‘Agnivardhana’ –meaning, stimulation of agni or digestive fire in our body.

Its pungent taste and aromatic smell has made it a favored spice in preparing pickles, confectionary, curries, biscuits and beverages. It is also used as an effective preservative and anti-oxidant. Crushed Ajwain seeds find utility in pot-pourri and scented powders.

Ajwain was originally grown in Mediterranean region. It is now grown in Afghanistan, Iran, Iraq, Pakistan, Central Asian countries, China and Africa. In India, it is grown in the plains and higher altitudes as a garden crop or in small fields.

Charaka, an eminent seer of ancient times prescribed Ajwain for relieving ailments like artcaria, and as anti-colic and anti-flatulent drug.

SOME THERAPEUTIC EFFECTS OF TRACHYSPERMUM AMMI SEEDS ARE:

The constituents of Ajwain which make it useful in herbal medicines include:

When used as an ingredient in herbal products, Ajwain relieves ailments like:

Administration of one to three drops of oil extracted from seeds relieves gastro-intestinal disorders. Omum water, the distilled oil in water acts as antispasmodic, relieves flatulence and assists digestion.

People can use herbal and standard therapies simultaneously to relieve and revitalize themselves.

It is not recommended to administer undiluted Trachyspermum Ammi oil to pregnant women due to its high thymol content. In general, undiluted oil should be used on the advice of a practitioner since it can be an irritant to our skin and mucous membrane.