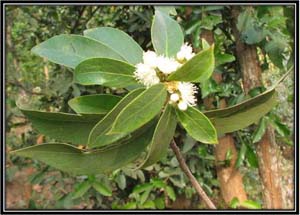 The botanical name of Symplocos Racemosa is lodhra. It is an ingredient of many rasayanas. A yellow dye is extracted from the leaves which, in combination with other plants, are used for dyeing silk. It is mainly found in the plains of hills of northern India and other Asian rivers, up to a height of 1400m.

Being an Ayurvedic herb, certain researches are being going on to extract more benefits from this herb.

Being a small evergreen tree with a height of 6-8.5m, leaves of this tree are lathery, orbicular and dark green in colour. The flowers of this tree are white or cream, in axillary, simple or compound racemes. The fruit is almost dark purple in colour containing 1-3 seeds. The parts which are mostly used in managements are bark and roots.

As mentioned earlier, parts which are mostly used are bark and roots. Bark has astringent properties which help in relieving diarrhea and liver concerns. It is used as a tonic in disorders like conjunctivitis and ophthalmia. A decoction of the same is used to relieve bleeding gums, menorrhagia, and other uterine disorders.

Following are the nutrient compositions of lodha tree:

The adverse effect of this herb is not fully known. But it is always advisable to use appropriate quantities of the herb or consult a registered practitioner before using this herb.

Apart from this herb there are other herbs also which helps in relieving female concerns. They are also made by planet ayurveda, Kumari Saar, Chander prabha to name a few.

We at Planet Ayurveda constantly do researches on ayurvedic herbs and try to take out the maximum benefit for our clients. These products are totally safe as they undergo various quality checks. We would really be obliged if you use our products and get benefited from them.