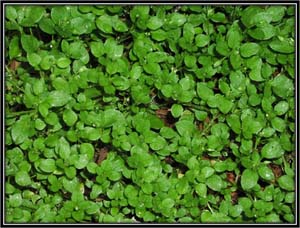 Stellaria Media is also commonly known as chickweed. It is a perennial herb that is native to a few parts of Europe. It is a staple diet given to Chickens. Colloquially it is also referred to as Chickenwort, Maruns, Winterweed as well as Craches. This plant germinates in winters and its flowers are small white in color. This herb belongs to the family of N.O.Caryophyllaceae and is also known as life root or Sqauw weed.
Stellaria Media is majorly available in the Brooks Range in Alaska. There are numerous plants that look like this perennial herb but lack the medicinal as well as culinary properties of Stellaria Media. This medicinal herb can easily be distinguished from its other family members by the proper examination of its stem. Stellaria has fine hair on one side of the stem only which is its unique characteristic.

CHARACTERISTICS OF THE STELLARIA MEDIA

Stellaria media is edible, nutritious and considered to be a delicacy in a few parts of the world. It is a leafy vegetable which is usually eaten raw in salads. Japanese use the Stellaria Media in a dish called Nankusa-no-sekku which is prepared during festivals. The common preparation of this herb is in the form of decoctions, tea, infusions as well as poultice.
This plant is grown commonly in the gardens, backyards and fields of almost all homes of Europe and North America.
This herb has been known to be used in folk medicine for the remedy of itchy skin conditions as well as pulmonary diseases. It is stated that John Gerard recommended this herb for the remedy of the ailment called mange. Modern day herbalists use this plant extract in controlled quantities to primarily relieve problems such as bronchitis, arthritis, menstrual cramps as well as skin diseases.

Stellaria media is used to relieve a number of common diseases like:

Obese patients are also recommended to use Stellaria Media for relieving their problem of Obesity.

The Stellaria media herb contains Nitrate salts, a saponin and is very rich in Vitamin C content. This herb is currently under research as a relieve for the management of obesity. Research has shown positive results. The method of action is by inhibiting the absorption of fat and carbohydrates by the intestinal digestive enzymes.

The ailments that this herb can relieve are as follows:

Stellaria media is known to contain Saponins. This compound tastes just like soap and if taken in large quantities can prove to be extremely toxic. Chickweed or Stellaria media has been repeatedly used to cause poisoning in cattle. This condition in animals is also quite rare and occurs only when the animal has eaten large unusual quantities of this perennial herb.
The poisoning caused in animals is scientifically known as nitrate poisoning. There are poorly documented cases of humans reporting of paralysis due to excessive Stellaria media intake. Nonetheless, there is no scientific study to back these claims of the toxic potential of the perennial herb of Stellaria media.
Chickweed or Stellaria media is available everywhere and has been repeatedly used in the ancient medicinal practice. This herb is known to be well tolerated and if it taken without proper guidance it can cause nitrate toxicity.

Currently there are no Planet Ayurveda Products that use this herb as an ingredient in them; however the below mentioned Planet Ayurveda products are useful in some conditions for which Stellaria Media is used:

We at team Planet Ayurveda are continuously working to provide the best possible management advice to all. We believe in using 100 percent natural ingredients that are absolutely free from any kind of chemical management or preservatives. The products we recommend and manufacture are purely vegetarian and comprise of the best organic herbs. We do not practice or endorse the concept of testing products of animals. Anyone looking for perfectly healthy and natural solutions for ailments can trust the team of Planet ayurveda.