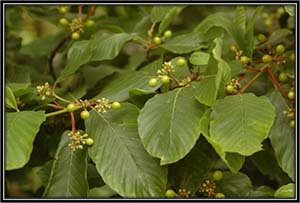 Cascara trees are mostly found in North America in places like Washington California, Idaho, Montana and Southeast British Columbia. These trees are grown in the Pacific coast of Canada and in some parts of central Africa.

Apart from being used as a medicinal herb, it is also used in food and beverages as a flavouring agent. In cosmetic industry, it is used in the manufacturing of sunscreen lotions.

Cascara trees grow from 20 to 40 feet high and have serrated leaves. The bark of the tree is reddish brown in colour and is used as a herb. Small flowers appear during spring and the fruits are black berries which are poisonous.

Dried bark of cascara tree is known for its relieving properties. The dried bark should be at least one year old to use it as a medicine. Fresh bark of the tree causes nausea.
One teaspoon of the bark powder should be used for steeping in a cup of water. If it is taken in a tincture form, 40 to 60 drops can be used along with water.

The bark of Cascara Sagrada has astringent, bitter and cooling properties. It is useful as a tonic for the digestive system and liver and it also works as a laxative.

Cascara is available in the form of dried bark, capsules and liquid extracts.

Cascara comprises of hydroxyanthraquinone glycosides which contain chrysophanol, O-glycosides of aloeemodin and C-glycosides. Minerals like manganese, calcium, potassium and vitamins like B complex, vitamins B2 and B6 are also present.

Cascara should not be consumed by pregnant women and lactating mothers. It is also restricted for patients suffering from intestinal injuries, irritable bowel syndrome, appendicitis, colitis, hemorrhoids and kidney problems.

If anthraquinones like cascara are used regularly, they may cause dependence. The body gets used to the medicine and the quantity of medicine should be increased for seeking the required result. In the long run if the person is using the medicine for constipation, it may lead to non functional atonic colon which is caused by excessive usage of laxatives. The colon loses its muscular strength and will result in chronic constipation. Hence, care should be taken while consuming cascara.

It is always advisable to consult a practitioner before using any herbs or supplements. We at Planet Ayurveda maintain stringent quality restrictions for manufacturing herbs, supplements and Ayurvedic medicines. We use 100 percent vegetarian and natural ingredients for all preparations. We proudly claim that we never use animals for testing our products. If you want to lead a healthy life style, choose Planet Ayurveda products.