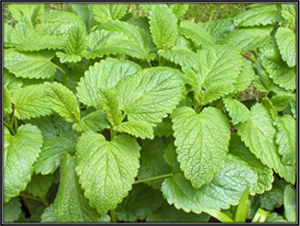 Melissa officinalis is commonly known as Lemon Balm and bililotan. The herb is known to promote longevity in people. It has been prescribed by the dispensary in London as early as 17th century. It was prescribed to be taken in every morning for the purpose of renewing the youthfulness and vigor of an individual.
The lemon balm was also recommended for strengthening the brain and relieving languishing nature as well as to prevent the problem of balding especially seen in men. It is said that a Welsh prince who lived up to the age of 108 years attributed the reason for his longevity to the regular drinking of lemon balm tree.

CHARACTERISTICS OF THE MELISSA OFFICINALIS

THERAPEUTIC POWERS OF THE MELISSA OFFICINALIS

The Melissa officinalis is considered to be benefiting for strengthening the functions of the stomach as well as promoting its action.

The crushed leaves of the Melissa officinalis are rubbed on the skin to act against mosquito bites. It is known for having anti bacterial and anti viral benefits. It is also a popular anxiolytic and sedative. It helps in improving mood balances and mental conditions. Studies have shown that Melissa officinalis also has positive effects on the patients of Alzheimers.

The Melissa officinalis essential oil is used in aromatherapy and is distilled with lemon oil as well as citronella oil.

The herb is known to relieve ailments such as:

The herb must be used in moderation. It is advised to consult a good herbalist before deciding on prolonged usage.

Though Planet Ayurveda does not currently offer any product that contains the Melissa officinalis herb it provides two products that have the similar properties.

We at Planet Ayurveda have been constantly striving to provide the best formulations to our customers. We do not believe in compromising on standards and hence have devised a quality check mechanism to maintain the consistency in quality levels. We are proud to say that are high quality products do not contain any chemical or preservative and are made with vegetarian organically grown ingredients.