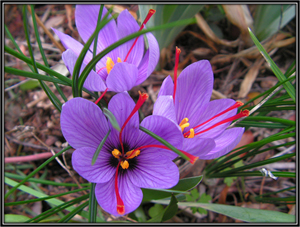 The common name for Crocus Sativus is saffron. The common names used in India are Kesar or Faran. Crocus Sativus is mostly used in Tibbi than in Ayurvedic medicines. It is quite expensive by weight; it consists of an essential oil which comprises of terpenes. Crocus is a genus in the family Iridaceae.
Crocus Sativus is native to Greece and Southwest Asia. It was first grown in the country of Greece. After many years it was also cultivated in North America, North Africa and Oceania. It has been traded and used for over a thousand years ago. Iran produces 90 percent of the world’s saffron. The use of Crocus Sativus in cooking was first recorded in the Old Persian language.

Crocus Sativus grows to 20–30 cm in height and normally bears four flowers. It is an autumn-flowering perennial plant. It sprouts 5-11 white and non photosynthetic leaves which are also known as cataphylls. They are structures that protect and cover the leaves as they develop. The plant produces green foliage leaves which 1-3 mm in diameter. In spring the leaves grow up to 40 cm. Purple buds start to appear in autumn. The flowers have a sweet honey like fragrance. The Crocus Sativus requires spring rains and dry summers in order to grow properly.

Crocus Sativus helps to strengthen the functioning of the stomach and promotes its action. Saffron acts as a stimulant and an antioxidant in order to increase the circulation throughout the body. It also keeps spasmodic disorders in check and promotes ones libido. It helps to combat depression and cancer.

This herb is a relieve for several ailments. Some of them are mentioned below:

The adverse effects of Crocus Sativus are not fully known. But the herb should be taken in small quantities by pregnant women as it may lead to abortion or miscarriage. Consuming poisonous saffron may cause jaundice, which consists of yellowing of the skin as well as the eyes. The side effects of Crocus Sativus vary from person to person; some people might not face any side effects at all.

Planet Ayurveda recognizes the several therapeutic properties of Crocus Sativus and therefore, we are using it in several of our products. One such product is:-

Planet Ayurveda is a reputed company that manufactures herbal products. Our products are strictly made from natural herbs. We provide a wide range of home remedies as well as natural supplements. We also offer herbal supplements that offer an alternative to modern medicines. Our products do not contain any flavors or any chemicals. They provide efficient and fast results. The products manufactured by us are known for their quality and safety. They are 100 percent safe, natural and free from harmful side effects, chemicals and preservatives.