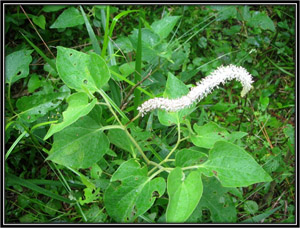 It is a perennial plant which comprises of a basal rosette of six leaves which are 8-15 cm long. A single spike like inflorescence appears from this rosette. It will be around 30 cm in length. Female stalks seem to be taller and in comparison to the male plants, flower less frequently.

It is mostly used as a medicinal or ornamental plant. The root comprises of highly valuable substances which have been used by Native Americans since a long time. The root is short and bulbous.

Root of the plant is used for medicinal purposes.

This plant acts as a diuretic, emmenagogue and emetic. Native American women chewed the root of the plant for the prevention of miscarriages. This plant comprises of saponins which work as ovarian and uterine tonic. It acts effectively on sex hormones and helps to address several disorders of reproductive tract, premenstrual syndrome and menstrual irregularities. It acts like a tonic for the digestive tract and the liver.

The bioactive components are a combination of steroidal saponins which include aglycone, diosgenin, and chamaelirin.

SAFETY PRECAUTIONS AND SIDE EFFECTS IN USING CHAMAELIRIUM LUTEUM

Chamaelirium Luteum should be used in limited quantities. Over dosage may lead to complications like nausea and vomiting. Pregnant women should not use this herb. It is better to consult a qualified practitioner before consuming any herb or herbal supplement.

Currently there are no Planet Ayurveda Products that use this herb as an ingredient in them; however the below mentioned Planet Ayurveda products are useful in some conditions for which Chamaelirium Luteum is used: