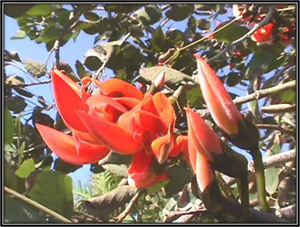 The herb Butea Monosperma belongs to the plant family Fabaceae and the order Fabales. This herb is commonly known as Palas in Hindi. It is also called “the flame of the forest” due to the bright orange and scarlet colors of its flowers. It follows the trade name “Butea” which has been taken from its scientific name Butea Monosperma.

The tree Butea Monosperma was discovered in India and its therapeutic properties were first discovered here as well. Its parts have been used ever since for various medicinal purposes.

This tree is native to India and can be found growing all over the country but it is most easily spotted in the mixed and/ or dry deciduous forests located in Central India and Western India.

The parts of the herb Butea Monosperma that are used for medicinal purposes are its flowers, its leaves the gum obtained from the plant, its seeds and the oil that can be extracted from the flowers as well as the seeds. The flowers of the tree are rich in glucosides, butin, neteroside and butrin whereas the seeds are a rich source of moodooga oil or kino- tree oil which is a fixed oil and is yellow color. This oil has various medicinal properties. The gum obtained from the tree is rich in gallic acid and tannic acid and is referred to as Bengal kino gum or simply Butea gum. The leaves of the Butea Monosperma are used as ingredients of tonics and aphrodisiacs and are also helpful in arresting bleeding or secretion.

The Butea Monosperma is famously known as the “flame of the forest” and the reason behind the tree getting accorded this name is that it bears very bright flowers which are either orange or scarlet in color. When the tree is in full bloom, the flowers grow in a number of clusters and the appearance of the tree is then such that it looks as if it has been set aflame, hence, the name. The tree Palas is of medium height and has compound leaves. The leaves of the tree fall off in the winter season and the flowers then bloom in the months of February and March. The flowers grow in huge clusters and on leaf-less branches. The fruits that the plant bears are in the shape of flat pods and each fruit contains a single seed within itself.

The herb Butea Monosperma has found many uses as a medicinal herb. It can be used internally or as a preparation that can be applied externally.

USE OF BUTEA MONOSPERMA IN AROMATHERAPY

The herb Butea Monosperma has not found any medicinal use in Aromatherapy as of yet.

The Butea Monosperma is a very safe herb to use. However, this should not be done without taking proper medical advice from a doctor. In fact, medical advice should be sought before the usage of any herb or drug.

PRODUCTS OF PLANET AYURVEDA THAT MAKE USE OF BUTEA MONOSPERMA