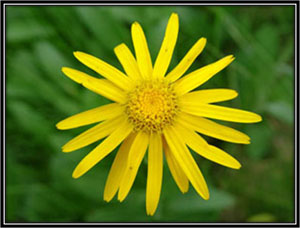 The herb Arnica belongs to two herbs families, namely, Asteraceae and N. O. Compositae and is scientifically referred to as Arnica Montana. This herb is commonly known by names such as Leopard’s Bane, Mountain Tobacco, Mountain Snuff and Wolf’s Bane.

The therapeutic value of the herb Arnica Montana was discovered hundreds of years ago and medicinal preparations from this herb have been known to be in use since times immemorial. It made its way to European folk medicine at a very early stage and even before that time, it was used for relieving sore throats, improving circulation, for relieving acne, muscle pain, bruises and the likes. Many also used it to relieve gunshot wounds and to provide relief to abrasions and cuts.

Arnica is primarily cultivated in the southern part of Russia and the mountainous regions of Europe. It is also grown in some parts of North America.

The flowering heads of the herb are used for medicinal purposes. They can be either fresh or dried. Some medicinal preparations also make use of the rhizomes of this herb; but these are very few in number.

Arnica Montana can be best described as a herb that is bitter to taste, has a light fragrance, with chemical properties of an astringent. It proves to be extremely beneficial to the immune system and the circulatory system. It is a pain reliever and helps relieve bacterial, as well as, fungal infections.

The herb Arnica Montana has found many uses as a medicinal herb. It can be used internally or as a preparation that can be applied externally.

USE OF ARNICA IN AROMATHERAPY

Some volatile oils can be extracted from the roots as well as the rhizomes of the herb Arnica Montana. These oils are mostly used in perfumes. However, the use of Arnica in Aromatherapy is very limited. Whenever, its oil is used, it is in its macerated form. This means the oil is always diluted with base oil for use. Arnica essential oil finds its use in providing relief to cuts, bruises, swollen regions and strained muscles.

Arnica Montana is known to be an extremely strong and potent herb and so must be used with precaution.

PLANET AYURVEDA PRODUCTS THAT MAKE USE OF ARNICA MONTANA

It is always advisable to consult a practitioner before using any herbs or supplements. We at Planet Ayurveda maintain stringent quality restrictions for manufacturing herbs, supplements and Ayurvedic medicines. We use 100 percent vegetarian and natural ingredients for all preparations. We proudly claim that we never use animals for testing our products. If you want to lead a healthy life style, choose Planet Ayurveda products.