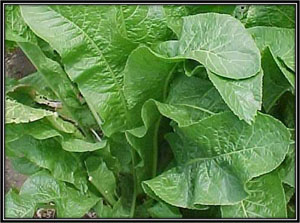 Commonly known as Horseradish, Armoracia Rusticana belongs to the the Brassicaceae family. This herbaceous perennial plant, originally belonged to south-eastern Europe and western Asia, but is now cultivated throughout the world on account of its medicinal and culinary use. In some countries this plant is also referred to as Red Cole and Cochlearia.

The herb was named horse radish on account of its strong roots that somewhat resembled the radish; however despite the name, the plant is not fit for consumption by horses.

Armoracia Rusticana has long fleshy white roots, large leaves and white flowers. The plant generally grows up to a height of 3-5 feet. It is known to flower by late spring. The roots of this plant are used the most; apart from several medicinal properties, the roots of horseradish have a very pungent taste and hence used for culinary purposes. While the intact root of this plant has no smell, its pungency is released only when it is crushed, grated or cut.

This herb belongs to the same family as that of mustard, cabbage, broccoli and nettle. Though the tender leaves of the plant were used as salad green in older times, of late, though edible, they are not used for culinary purposes anymore.

Use of horseradish for therapeutic purposes has been traced back to over 2000 years. In ancient times the plant was used to relieve colic, sciatic pain, help increase urination and kill intestinal worms amongst several other uses.

In addition Armoracia Rusticana is often prescribed to increase appetite, as well as, strengthen the body’s immune system.

This herb is known to contain glucosinolates. In addition the roots of the plant contain phenolic acids, the peroxidase enzyme and coumarins. The plant also contains volatile oils like that of mustard oil; it is this oil that gives the horseradish its antibacterial property, on account of the presence of allyl isothiocyanate in it. Every 100gms of fresh horseradish is also known to contain an average of 79.31mg of Vitamin C.

Armoracia Rusticana has been used for medicinal purposes since the times of the ancient Greeks and Romans.

Some of the ailments this herb can help relieve are:

People suffering from conditions like renal problems, gastric ulcer and goiter should avoid consuming horseradish. Medicines containing horseradish should also not be given to children below four years of age. In addition one should avoid consuming large quantities of this herb as it contains volatile oils which could be poisonous. Topical use of this herb may cause skin irritation.

Before using any herb it is advisable to consult a medical practitioner.

Though Planet Ayurveda does not use Horseradish in any of its products, it has other herbal supplements that are very effective in relieving some of the conditions that can be relieved by horseradish. These are:-

Planet Ayurveda manufactures a wide range of Ayurvedic Medicines that help relieve all kinds of ailments; from simple ones like the common cold to complex ones like kidney and liver diseases. All our products are vegetarian and made from 100 percent natural ingredients. Our organization aims at providing the highest quality herbal supplements for the global market.