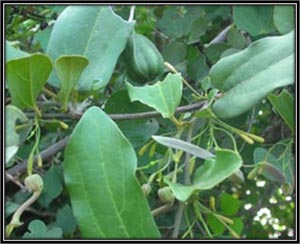 Indian Birthwort and Snakeroot are the common names of Aristolochia Indica. In Sanskrit it is known as Sunanda. The plant has been used as a traditional medicine for post-delivery-infections and snakebites.

The flowers of this plant are said to resemble a snake or a curved foetus. The common Hindi name for this plant is Ishwar mul. The name suggests that it has the efficiency of neutralizing snake venom.

Aristolochia Indica is native to India. It also grows in Srilanka, Bangladesh and Nepal. This plant is a perennial climber shrub. It is considered as an endangered and rare medicinal plant. The flowers of the plant give out bad odour. Tender leaves are light purple in colour. The fruit has six valves and shallow grooves which contain several triangular seeds.

The bark of the plant is woody, has light yellow colour and is highly porous.
Young roots of the plant are smooth and light brown in colour whereas the older ones are relatively rough and are cork like in appearance.

The roots are extensively used to reduce dry cough and inflammation. The leaves of the plant are used as an antidote for snake poisoning. The plant is also used as a blood purifier.

Rhizomes, leaves and roots of the plant are used a medicine.

The root of the plant is used as a stimulant and tonic. It is also used in powder form along with honey as a relieve for leucoderma. The decoction of the root is beneficial for relieving impotency.

The plant is used as an aphrodisiac, anthelmintic (eliminates parasitical worms) and appetizer.

The roots of the plant are mixed with honey and are used to relieve leprosy in traditional medicine.

The root comprises of a crystalline substance, a glucoside, isoarisolochic acid, 0.05 percent carbonyl compounds, allantoin and a small amount of oil.

This herb has been widely used for the management of the following disorders:

Though the plant is helpful in many ways, it has to be remembered that it is nephrotoxic and carcinogenic. Over dosage of the plant components may be lead to serious complications. This plant medicine should ever be consumed without consulting a registered medical practitioner.

We at Planet Ayurveda offer the best advice related to herbal medicines, herbs, supplements and Ayurvedic medicines which are 100 percent natural and vegetarian. All the products are without any preservatives and chemicals and made with the best quality herbs. We never test any of the products on animals. You can choose Planet Ayurveda products for a healthy living.