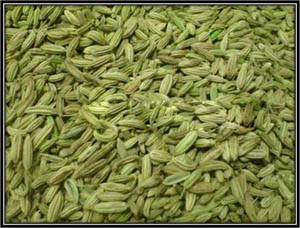 ‘Anise’ is a herb primarily used for culinary purposes. It belongs to the celery or ajwain family. The fruit borne by Anise is commonly known as ‘Aniseed’ or Hua-Hsain while its botanical name is ‘Pimpinella Anisum’. The Indian name for aniseed is ‘Velaiti saunf’.

Anise has feathery leaves and white and flat flower-heads. It grows up to 75 cms in height. Aniseed is grayish-brown to ground-grey oval-shape seed measuring 3.2 to 4.8 mm in length. It has an aromatic odor and a pleasant and distinctive liquorice taste.

Anise was originally grown in Middle East. It was also cultivated by early Romans and Greeks. It is now grown in other parts of the world including India, Europe, Mexico and Asia Minor. Ripe and dried fruits, and seeds of anise are widely used for preparing herbal supplements.

Aniseeds have been used for years to flavor curries, cakes, sweets, biscuits and cookies while ancient Egyptians were the first to make good use of its medicinal properties.

Aniseeds are used in herbal medicines since they contain essential oils which have therapeutic properties like:

Aniseed extracts are used in various infusions and teas to relieve different ailments. An infusion prepared by boiling one teaspoon aniseeds in a cup of water, leaving it overnight, decanting the clear fluid and mixing with honey is administered to relieve indigestion especially when an individual experiences gurgling in the abdomen.

It also prevents fermentation and gas in the stomach and bowels. Be cautious not to over-boil aniseeds in water since it may lose its essential oils and digestive properties.

Anise-oil is a mild expectorant. It is used as an ingredient in many liqueurs and beverages. It is also used to flavor mouth-washes and other dental preparations.

Anise-oil is a pale-yellow liquid with a distinct taste and odor of its fruit. It has replaced the use of anise fruits in various medicinal and flavoring preparations. The main constituent of anise- oil, ‘anethole’ gives it its unique flavor. It also contains chavicol, acetone, p-methoxyphenyl, methyl and traces of sulphur, and terpenes.

As an ingredient of herbal products, aniseed relieves various internal and external ailments. It is also known for its aromatic relieving ability.

Essential oils distilled from aniseeds are used to relieve:

Herbal relieves can be co-administered with standard therapy after consulting a practitioner. Although aniseed is a safe herb, its trans-anethol estrogen-like property makes it unsafe for pregnant women and people suffering from estrogen dependent cancers or endometriosis.

PLANET AYURVEDA PRODUCTS THAT USE ANISEEDS

Currently there are no Planet Ayurveda Products that use Aniseeds as an ingredient in them; however the below mentioned Planet Ayurveda products have similar medicinal benefits as Aniseeds and can be used for ailments where aniseeds prove to be helpful: