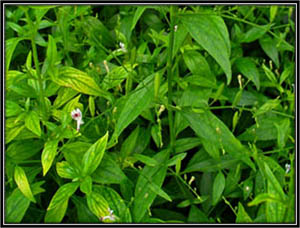 Andrographis Paniculata is also known as ‘Green Chiretta’ or ‘Creat’ in English; ‘Kalmegh’ in Hindi and Bhunimba in Sanskrit.

It has been used for many years as a house-hold relieve for intermittent fevers and jaundice. More than half of all herbal preparations used to relieve liver ailments contain this herb.

Andrographis Paniculata plant grows in forests and plains throughout India, especially South-India and other Tropical Asian regions. It thrives in moist and shady places.

It stands erect with dark-green stems and can reach up to one meter in height. It has long, glabrous leaves and whitish to pale-pink flowers with purple or brownish blotches. The tree bears oblong, yellowish-brown capsules containing many seeds.

The plant as a whole, and its roots and leaves separately are utilized in herbal preparations. These herbal remedies are available in capsule, oil, and decoction and tablet forms.

THERAPEUTIC USE OF ANDROGRAPHIS PANICULATA

Andrographis is often used to serve as bacteria killing agent, astringent, fever reducer, painkiller and management for worms. Andrographis Paniculata is also used in an ayurvedic preparation called, ‘switradilepa’ which is used in the management of vitiligo.

SOME THERAPEUTIC EFFECTS OF ANDROGRAPHIS PANICULATA ARE:

Andrographis Paniculata contains many components which are responsible for its therapeutic properties like:

Some ailments which are relieved using extract from the plant as a whole or separately from its leaves and roots are:

This herb is generally regarded safe for human use. However, it has to be administered either separately or alongside standard management after consultation with an approved practitioner.

Planet Ayurveda products that use the herb Andrographis Paniculata are: