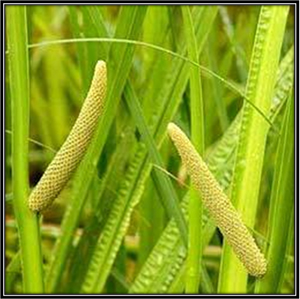 ‘Sweet Flag’ is a herb which has been in use since ancient times due to its medicinal value. The botanical name for Sweet Flag is ‘Acorus Calamus’. It is also known as Sweet Root, Sweet Sedge, Bach-Bach or Myrtle Flag.

The Hindi name for this herb is ‘Vacha’ while the names used in Sanskrit scriptures for this herb are ‘Vacha’ or ‘Ugragandha’. It was originally grown in Europe.

This herb is a semi-aquatic plant which thrives in marshy and damp places. Although many varieties of this polypoid are available, only the ones which do not contain a toxin called, ‘p-asarone’ is utilized for medicinal purposes.

This herb is an aromatic, perennial plant with rhizomes. The leaves are slender, long, simple and sword-shaped .They rise alternately from the rhizomes and are spongy in texture.

Its flowers are fragrant, small and pale-green. Its fruits are fleshy, three-celled capsules.
The root-stock and dried rhizomes are widely used in various herbal preparations. Herbal supplements containing Acorus Calamus are available as powder, capsule or rhizome.

Acorus Calamus contains essential oil which is widely used in herbal preparations. Beta-asarone is a major ingredient of this oil. Different species of this herb contain Beta-asarone in varying amounts. In some species, it is completely absent.

In Ayurveda, this herb is used for improving memory. It is also blown into the nose of coma-patients for regaining conscience. In India, it is a practice to give a mixture containing Vacha powder and ghee on the seventh day to a new-born to enhance speech development and intellect.

Chinese also use this herb for speech development and recovery from stroke. Essential therapeutic uses of this herb are memory enhancement, as aromatic digestive and nerve stimulant. It also finds utility as sedative, re-juvinative and themogenic agent.

SOME OTHER THERAPEUTIC USES OF ACORUS CALAMUS

The extract of heartwood, flowering tops, young shoots, the bark, fruits and the gum of the plant are used to create products for use. These extracts are used as an anodyne, bactericide, refrigerant, detergent, astringent, styptic, masticatory, expectorant, stimulant and as an antiphlogistic.

Experimental studies have proven therapeutic effectiveness of Acorus Calamus through various activities like:

The entire plant is useful in relieving digestive and stomach disorders. According to Ayurvedic scriptures, the ‘rasayana’ is regarded the best for relieving nervous and brain disorders.

The extract in different forms, their dosage and ailments they relieve are:

Ayurvedic scriptures have recommended use of this herb for liver and kidney disorders, eczema and rheumatism. It is also used to prepare ‘poultice’ for paralyzing limbs.

Acorus Calamus is a popular ingredient in Planet Ayurveda products. It is found in the following: