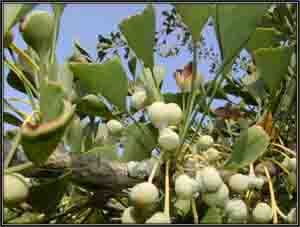 Ginkgo Biloba is one of the world’s oldest living trees. It is also known with the names Ginkgo and Maidenhair tree. It can be traced back to around 200 million years. Individual trees can last as long as 1000 years and grow to a height of around 120 feet. These trees survived the ice age in China. They are considered as sacred and are found in Buddhist temples spread all over Asia.

Ginkgo supplements are one of the best herbal supplements prescribed all over the United States and Europe. Chinese traditional medicine has been using Ginkgo for thousands of years.

Seeds and leaves of the plant are used for medicinal purposes.

This Herb Has Several relieving Powers; Some of Them are as Follows –

Ginkgo is an astringent, bittersweet herb which shows positive influence on blood vessels, bronchial tubes and controls allergies. The leaves show stimulating effect on the blood circulation and the seeds have antibacterial and antifungal effects.

In this video Dr. Vikram Chauhan explaining about benefits and uses of Ginkgo Biloba.

SAFETY PRECAUTIONS AND SIDE EFFECTS IN USING GINKO BILOBA

It is always advisable to use any herb or herbal product after consulting a medical practitioner. Over dosage may lead to serious complications.

Gingko if taken in larger quantities may cause headaches, dermatitis, vomiting and diarrhea. Persons who consume blood thinning medication should not use Ginkgo as they influence the medicines.

Currently there are no Planet Ayurveda Products that use this herb as an ingredient in them; however the below mentioned Planet Ayurveda products are useful in some conditions for which Ginkgo Biloba is used: