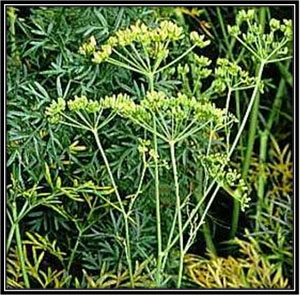 A resinous gum, asafoetida emanates from the tap root of a perennial herb. Its botanical name is Ferula asafoetida. Its name is derived from a combination of two words, resin (asa) a Persian word and foetida, a Latin word.
The resin is collected from the stem of the plant as well. Asafoetida is very hard in its natural form and hence it is mixed with flour and gum Arabic to make it usable. The commonly available form is the compounded asafoetida, which has only 30 percent of asafoetida.

This herbal species is indigenous to Afghanistan and is also grown in India, Iran and Central Asia. It is used as one of the medicinal herbs in native India since ages. It has an unpleasant smell in raw form but gives out a nice flavour in cooked dishes.
Asafetida is used as a digestive aid, condiment in food preparations and pickles. It is predominantly used in vegetarian cooking in India. When sprinkled in hot oil or clarified butter, it gives out an aroma equivalent to sautéed garlic or onion.

For every 100 grams of asafetida, 67.8 percent is carbohydrates, 4 percent is protein, 1.1 percent fat, 7 percent minerals and 4.1 percent fibre. Minerals that exist in asafetida are iron, phosphorous, riboflavin, carotene and niacin. It has a calorific value of 297.
Asafetida comprises of 25percent gum, 40-64 percent resin, 1.5-10 percent ash and 10-17 percent volatile oil.

Asafoetida has several medicinal properties which make it an effective ingredient for herbal remedies. It is known to reduce flatulence as it inhibits the growth of the microflora in the gut region. It is known as a herb which can expel wind and gas from the stomach. It is also popular as a nervous stimulant, sedative and digestive agent.

ASAFOETIDA IS KNOWN TO GIVE POSITIVE RESULTS IN DISORDERS LIKE:

ASAFOETIDA HAS SEVERAL Relieving POWERS THAT MAKE IT A POPULAR INDIAN HERB:

Asafoetida should be used in small quantities. It should not be used in infants, pregnant women, people with gastro intestinal problems, epilepsy, bleeding disorder and high or low blood pressure. It is best advised to use the herb under the guidance of a registered practitioner.

Asafoetida is used in aromatherapy as well. The asafoetida essential oil is used in relieving nervous disorders, colic, coughs, pneumonia, muscle spasms, and colic. It is also used for eliminating parasites in the intestine like worms. This oil is useful in reducing chronic fatigue, Candidiasis and digestive sensitivity.