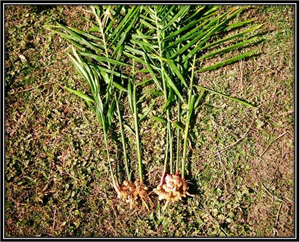 Zingiber Officinale is a common ingredient in the Indian kitchen. It is known as Adrak in many parts of the country. This perennial herb has an underground branching system. The leaves and the rhizomes of the plant have peculiar fragrance when they are cut. The Rhizomes of the plant are dug out and the leafy part is dried before using.
Ginger or Zingiber Officinale is known to have originated in India and was introduced to Chinese after a while. This spice and medicine is recognized for use in major parts of the world especially Europe.

The sun dried Adrak plant has been repeatedly mentioned in the medicinal history of India and China. The Sanskrit name of the plant is Singabera. This plant has been called a maha aushadhi or great medicine in the Vedic Period. Galen a great physician is said to have used this medicinal plant to relieve defective humors in the body. He also used it to relieve patients suffering from paralysis and also on patients who were detected to have phlegmatic imbalances in their body. Other physicians across the world used this medicinal plant as an aphrodisiac, a carminative and also as an anti flatulent.
Ginger is added in vegetable preparations, breads, cookies, puddings, cakes, pickles and soups. It is also added to the common curry powder as well. The oil from the rhizomes is a flavoring essence and is used in perfumery.

An in depth study of the plant showed that it contains moisture, protein, fat, minerals, fiber and carbohydrates. The mineral and vitamins that the medicinal herb contain are phosphorus, calcium, iron, carotene, riboflavin, thiamine, niacin as well as Vitamin C. The calorie count of the Zingiber Officinale is 67.
The composition of the plant varies with the kind of region, agro climatic, relieving, drying , storage and packaging conditions. It is important to note that the dried cracked and crushed medicinal plant contains viscid oil which has a pungent flavor and whose odor lasts for a very long time.

THERAPEUTIC POWERS OF THE ZINGIBER OFFICINALE

Adrak or Ginger is used in local medicines in India and the Far East. It has carminative properties. It is used as a rubefacient to counter the problem of muscular pain. It also has aphrodisiacal properties as well.

The Zingiber Officinale is known for relieving the following health problems:

The herb should not be consumed by patients who are suffering from gall bladder stones. It can also have allergic reactions like rash. Ginger can also cause heartburn, bloating, belching, nausea and gas. Un-chewed ginger can cause a person to have intestinal blockage and ulcers. It can also affect clotting, heart rhythms and blood pressure.

PLANET AYURVEDA THAT USE THIS HERB

At planet Ayurveda we recognize the beneficial properties of this herb and have used it as an ingredient in the following products:-

The team of Planet Ayurveda recommends an herbal medicinal preparation only after studying the history of the patient. The team of herbalists and researchers at the organization are working continually to provide the best organically made products. We at Planet Ayurveda do not practice or endorse the testing of products on animals. Our products our vegetarian and do not contain any preservatives or chemicals.