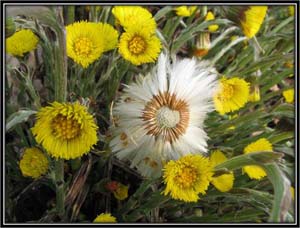 Tussilago Farfara is the botanical name for Coltsfoot. It belongs to the family of N.O.Compositae and it is also known as Coughwort, horsehoof, Ass’s Foot, Hallfoot and Foalswort. It is consumed in the form of decoction, syrup as well as powder.
Coltsfoot or Tussilago Farfara is a perennial herbaceous plant that is often found in colonies of dozens. The flowers resemble dandelions and appear in early spring time. This plant is usually between the heights of 10 to 30 cms. The leaves, flower and the root of the plant are primarily used for preparing the medicines.
In the earlier days Tussilago Farfara was known as Filius Ante patrem or the son before the father. This is basically because of the star like golden colored flowers that wither just before the broad sea green leaves are about to blossom.

The parts of the plant that are used to make medicines are flowers, roots and the leaves. Coltsfoot is a low growing tree that has wooly leaves. This herb usually grows in extremely dry and damp conditions.
It grows well on alkaline days and is found in places such as the wastelands on the side of a railway track or road. This plant is collected from the wilderness of Balkans in Eastern Europe (mainly Bulgaria, Yugoslavia, Poland, Czech, Slovakia and Hungary). Coltsfoot is a known antitussive.
The buds, flowers as well as the leaves of the plant have been used for centuries to relieve dry cough and relieve throat irritation. The herb is an important element of the Chinese herbal medicine history for the management of chronic bronchitis, wheezing, asthma and other such respiratory disorders. The silky seeds of this plant were once also used for stuffing in mattresses and pillows.

The plant of Tussilago Farfara or Coltsfoot is known for its reliever properties. It is benefiting for patients suffering from skin allergies, cough, bronchitis, asthma, tuberculosis and Ulcer. It has astringently properties and is used to relieve diarrhea. The dried powder of Coltsfoot leaves is to clear nasal passage obstructions and facilitate proper breathing. Freshly bruised leaves can also be applied on boils, suppurating ulcers and abscesses.

The Tussilago Farfara plant is rich in:

Tussilago Farfara is used to relieve the following ailments:

Currently there are no Planet Ayurveda Products that use this herb as an ingredient in them; however the below mentioned Planet Ayurveda products are useful in some conditions for which Tussilago Farfara is used:

We at Planet Ayurveda are working to provide our customers with the best possible natural solutions. We believe that the nature holds the key to all relieves. It has marvelous remedies that can provide the best of health conditions to its users. Our products are chemical and preservative free. They are made of natural and organic ingredients only. We are proud to say that the products of Planet Ayurveda as not tested on animals.