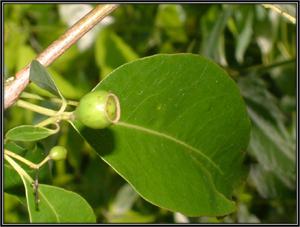 The common name for Santalum album is Sandalwood. The Indian common name is Chandan. This herb belongs to the same family as European mistletoe. It is normally found in Nepal, India, Sri Lanka, Bangladesh, Indonesia, Australia, Hawaiian and Pacific Islands.
Santalum album is an aromatic wood that retains its fragrance for decades. Essential oils can be extracted from this wood. Both the wood and the oil produce a remarkable fragrance. However, Indian sandalwood is an endangered species and is ingenious to South India.

Santalum album is a medium sized hemi parasitic tree. It has a dark and rough bark with drooping branches. It produces dull purplish flowers in bunches. It has opposite leaves shining on the upper surface. This herb is also used for many religious purposes in many religions such as Hinduism, Buddhism, Japanese, Islam and Chinese religions. It is used in worship and also for various other traditional ceremonies.
Sandalwood is an expensive wood; the sandalwood oil in India is popularly used by the cosmetic industry. The main source of sandalwood, Santalum album is a protected species and demand for it cannot be met. Many species of other plants are sold as sandalwood.

Santalum album was also used as a popular medicine during 1920 – 1930. It was mainly considered to be an antiseptic. Its main component is beta santaloi, it is known for its anti microbial properties. It is also used in aromatherapy as well as in soaps.

This Herb Can Act As:-

Santalum album is rich in various essential minerals such as sodium, potassium, calcium, phosphorous, chlorine, magnesium, nitrogen, sulfur and nitrate. It also has traces of copper, zinc, iron and manganese.

Santalum album is helpful in relieving various diseases and aliments such as:-

The smell of Sandalwood itself as well as sandalwood oil is very quite fragrant, relaxing, reduces confusion and helps in balancing the mind. It also helps to clear up dry cough and boosts the digestive system.

Planet Ayurveda takes pride in manufacturing Ayurvedic products that are beneficial for the body. Our company makes natural supplements and home remedies which are absolutely beneficial for improving overall health. Our products provide quick and excellent results as they are 100 percent natural and organic. They do not contain any preservatives and undergo several quality tests before being released. Numerous people have enjoyed the benefits of our natural products and now it’s your chance to improve your health.