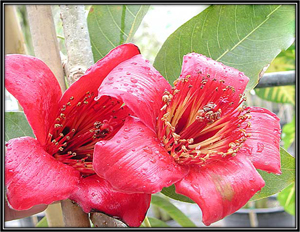 Salmalia malabarica is commonly known as Silk Cotton Tree in English. It is commonly named as Semul in Hindi and Rakta – Pushpa in Sanskrit. It belongs to the family of Bombacaceae.
This herb can be found all over India, as well as in other regions of tropical Asia up to an altitude of 1500 m. it contains certain white fibers like cotton. Its trunk bears spikes, in order to prevent itself from animal attacks. Although, the trunk is quite bulky, it could be useful for timber but the wood is quite soft to be beneficial.

It is a tropical deciduous tree that has a straight tall trunk. The leaves are large with lanceolate leaflets. Normally red or yellowish orange flowers with 5 petals grow on this plant. It produces capsules, which happen to contain certain fibers similar to cotton. The tree has long spread branches and the capsules contain many seeds.
Many parts of the Salmalia malabarica are used such as, the seeds, leaves, fruits as well as flowers. The gum secreted by the stem bark ‘mocharus’ is quite useful. This gum is used to relieve influenza, acute dysentery, tuberculosis and influenza.

The gum of Salmalia malabarica has plenty uses, some being traditional while other being modern. During olden times, this gum was used to relieve sores and wounds on the skin, bladder disorders and gonorrhea.

Salmalia malabarica helps to relieve a number of diseases and aliments. Some of them are listed below:-

Although using Salmalia malabarica is quite safe to use. It does not cause any harmful side effects and can be used by all age groups. However, it is important to make sure that the maximum dosage of the stem bark and flowers are 50/250 mg.
Before using any herb it is advisable to consult a physician.

This herbal medicine does not provide a quick temporary relieve to the problem of erectile dysfunction it used to provide a highly beneficial permanent result. It also helps to increase sperm count and semen quantity. It aims at providing lasting performance.

Planet Ayurveda is respectable company that manufactures 100% natural, pure and vegetarian ayurvedic products. Our products have certificates of authenticity and standard herbal formulas. We make products that specialize in male and female health, liver care, respiratory care, arthritis remedies, kidney support remedies and so much more.