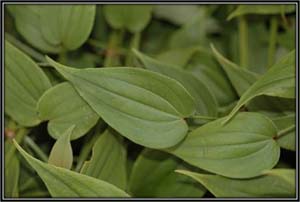 It is known by the name of Manjista or Chitravalli in Sanskrit. Commonly used names are Manjit or Majeeth in Hindi or Indian / Dyer’s Madde in English. As the name signifies, this herb is used in many Asian countries as a dye, for imparting shades of red, scarlet, brown and mauve to cotton and woolen fabrics. In India and some other countries, this herb is greatly used in skin care products and relieving skin ailments. It also helps in relieving urinary disorders.

It usually grows over other bushes or trees. A perennial climber, growing throughout India, is common throughout the lower hills of the Indian Himalayas in the north and the Western Ghats in the south up to an altitude of 3500m. The roots of this herb are very long, twisted and cylindrical with a thin red colored bark. The parts of this herb which are major used are dried roots and stem.

The roots of this herb are widely used as a tonic as well as loaded with astringent, de-obstruent and anti-inflammatory properties. Decoction for the same is used in severe diseases like paralysis, jaundice, dropsy and infections or obstructions of the urinary passage.

During inflammatory conditions of the chest and in rheumatism, the plant plays a significant role. It is also used in diseases like tuberculosis and intestinal ulcer.

Most of the Ayurvedic practitioners recommend this as a blood purifier for skin diseases and to improve the complexion. For animals, Rubia cordifolia is used in the management of liver fluke, dysentery, maggots, wounds and intestinal worms.

Till date, no adverse affects have been reported with the recommendation of this herb. According to the doctors, this herb is totally safe.

This herbal formulation contains Ghrit Kumari, CHirata, Pit Papda and Manjishta. Manjishta is sweet, astringent and successfully balances vata, pitta and kapha doshas. It acts like a blood purifier. Chirata is used to relieve several skin problems. It helps to reduce fever, indigestion, nausea and bloating. It protects the liver and the entire herb has therapeutic properties. It is helpful in reducing fevers. Ghrit Kumari is useful for relieving sunburns. It produces cooling effect. It is also helpful to relieve other skin diseases and radiation burns. It helps in the management of pimples, eczema and acne.

All our products are manufactured with 100 percent vegetarian and natural ingredients. No chemicals or preservatives are used. Ancient Ayurvedic texts are referred for deciding the combination of drugs. We never believe in testing our products on animals. Various levels of quality checks are performed before the final packing of the medicine. It is our constant endeavor to deliver quality products to our customers. For healthy life, opt for Planet Ayurveda products.