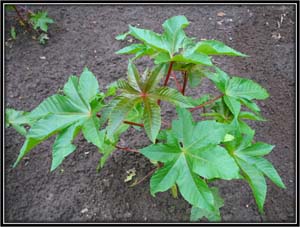 The common names of Ricinus Communis are castor bean, castor oil plant. In Hindi it is known as Endi and in Sanskrit it is Eranda. The name Ricinus is derived from the Latin language and means ‘tick’, as the mottled seeds of the plant look like the insect.

Castor is native to Eastern Africa, southeastern Mediterranean Basin and India. But it grows well in all tropical regions. This plant has been under cultivation for more than 6000 years and it was widely used for cosmetics and oil lamps in ancient Egypt.

Castor is a tall branched shrub which reaches a height of up to 4 m. The stem is hollow, erect and grayish green in colour when tender, and as it ages, the stem changes to brownish red colour. The leaves are seen in spirals with coarse toothed segments. The flowers are seen in terminal inflorescences which are green and sometimes red in colour. Male flowers have prominent stamens and spikes which are around 15 centimeters long. Fruits are greenish or reddish purple, spiny capsules which contain oval, large shiny bean like seeds with brownish mottling on them.

Ricinus Communis has several relieving properties that add to its therapeutic value. Some of these are:

Ricinus Communis offers relieve to several diseases, ailments and discomforts. Some of these are:

Precaution should be taken before using Ricinus Communis for internal use. However, it is a relatively safe herbal extract. Before using any herbs it is advisable to consult a medical practitioner.