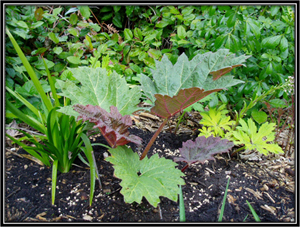 Commonly known as Rhubarb, it originally belongs to south eastern Russia. Rhubarb has been around since the ancient years. It was also found in a Chinese herbal remedy, which was found around 2700 BC. It was bought to Europe during current times. It was also found in Britain since the 16th century. Now, it is cultivated within restricted areas of India and Central Africa.
The plant has very strong stems and roots with big radical leaves. The underground stems containing the roots and leaf shoots of the plant; also known as rhizomes are used in the drug.

Rheum Emodi has small flowers found in greenish to red clusters of flowers arranged on a stem. The leaf stalks of the plant have a strong tart taste. Rheum Emodi is normally used to make pies and desserts. It can also be pickled and dehydrated, and added to certain fruit juices. The roots of Rheum Emodi produce a strong brown dye. Apart from cooking Rheum Emodi can be used as a laxative, that helps relieve constipation.
However, the leaves of Rheum Emodi are toxic. They comprise of oxalic acid which is destructive and corroding in nature. Certain pests may attack the Rheum Emodi plant; they mainly attack the leaves and stalks.

Use of Rheum Emodi for therapeutic purposes has been traced back to thousands of years by the Chinese. During olden times the roots of the plant were used as a laxative and a dieting aid. The roots of Rheum Emodi were used in Europe and Middle East even during the middle ages and are used in Chinese medicine even today. They have been known to lower blood glucose levels in diabetes.

The stalk of Rheum Emodi consists of considerable amounts of minerals, fat, carbohydrates, protein, fiber, and moisture. It also comprises of various vitamins such as iron, calcium, vitamin C and phosphorus.
The rhizomes of Rheum Emodi produce rhaponticin, glucoside and chrysophanic acid. The roots also consist of rhein and emodin. Rhizomes also produce an essential oil which contains eugenoi.

Rheum Emodi has been used for medicinal purposes since the times of ancient Chinese. Some of the aliments that this herb can help relieve are:

Rheum Emodi contains certain amounts of oxalic acid which is dangerous. Continuous use could lead to the formation of stones, either in the kidney or in the bladder and distressing nervous symptoms. Rheum Emodi, should be avoided by those patients who have gout, epilepsy, rheumatism, tendency to get wounds, and other related diseases with uric acid. Before using any herb it is advisable to consult a medical practitioner.

Though Planet Ayurveda does not use Rheum Emodi in any of its products, it has other herbal supplements that are very effective in relieving some of the conditions that can be relieved by horseradish. These are:-

Ayurveda products are manufactured with 100 percent natural and vegetarian ingredients, without any chemicals or preservatives. We rely on ancient Ayurvedic texts to prepare all the medicines. We do not encourage testing of our products on animals. All the medicines and herbal supplements undergo quality checks at various levels. Opt for Planet Ayurveda products and seek good health.