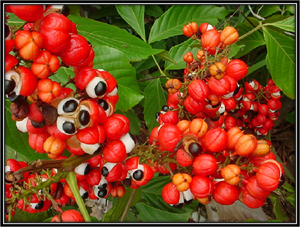 Paulina cupana is commonly known as Guarana. Other names include Brazilian Cocoa, Guarana paste or Gum.

This plant is indigenous to the Amazon basin and also commonly seen in Brazil.

Leaves, stems, roots and seeds of the plant are used for medicinal purposes.

It is a climber which belongs to maple family. Guarana has large leaves and bears clusters of flowers. It is popular for its fruit which is similar to the coffee bean in size. The fruits are orange-yellow in colour and contain seeds within. The seeds are collected and dried over fire. The kernel paste is made into cylindrical sticks. The most common forms of Guarana are extracts, syrups and distillates. It is a flavouring agent and used as a source of caffeine in the soft drink industry. The concentration of caffeine is twice the amount found in coffee beans.

Guarana usage has been spread across the globe and has become popular for its revitalizing and stimulating effects.

Guarana is used as an appetite suppressant. It has diuretic and astringent properties. Guarana is beneficial in providing mental alertness, relieving PMS related headaches. It is also recommended for weight loss. It increases the metabolic rate and reduces appetite which is useful in weight loss. Guarana improves energy levels and physical performance.

The main advantage of Guarana is that it keeps the body awake and alert because of the caffeine substances present in the seeds and other parts of the plant. The effect lasts for few hours. It is widely used in the Amazon by Indians who want to go into the forest for long walks. They rely on Guarana as it gives the required energy and stimulation.

Guaranine is the primary constituent in the seeds. Natural phenols like catechin and epicatechin are also found. Ash, resin, starch, tannin, theobromine, theophylline, protein and fat are also present in varying quantities in the seeds.

SAFETY PRECAUTIONS AND SIDE EFFECTS IN USING PAULLINIA CUPANA

Pregnant and lactating women should not consume this herb. When taken in moderation, it is safe. Over dosage may lead to trembling, insomnia and palpitations.

Currently there are no Planet Ayurveda Products that use this herb as an ingredient in them; however the below mentioned Planet Ayurveda products are useful in some conditions for which Guarana is used:

All our Planet Ayurveda products are manufactured with 100 percent natural and vegetarian ingredients, without any chemicals or preservatives. We rely on ancient Ayurvedic texts to prepare all the medicines. We do not encourage testing of our products on animals. All the medicines and herbal supplements undergo quality checks at various levels. Opt for Planet Ayurveda products and seek good health.