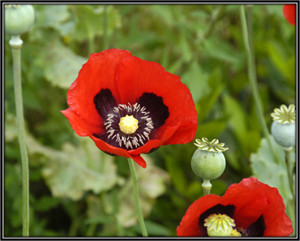 Papaver somniferum is commonly known as poppy seeds. In Hindi, the name is Khas-khas.

Poppy plant is indigenous to Asia minor. It must have come to China and India by eighth century. The main poppy cultivated areas are China, Asia Minor and the Balkans. When incisions are made into the un-ripened capsules of poppy plant, milk oozes and with spontaneous evaporation, gets thickened. It is known as opium.
Opium if used cautiously can be a very useful drug.

Seeds of poppy plant are used for medicinal purposes.

It is an annual herb which is erect and has latex and smooth surface in all parts.

Poppy seeds contain protein, moisture, fat fiber and also large amounts of carbohydrates. These seeds also contain minerals like phosphorous and calcium. It has a calorific value of 408.

The sap of the poppy plant contains opium and oxalic acid. It has around 25 alkaloids like codeine, morphine, narceine, narcotine and papaverine.

SAFETY PRECAUTIONS AND SIDE EFFECTS IN USING PAPAVER SOMNIFERUM

Opium should be consumed only in the prescribed dosage. It should be administered only under the guidance of a practitioner. Infants, young children should not be given opium. It should be avoided during pregnancy and people who suffer from kidney diseases should not use opium.

The herb should be used in the prescribed dosages. Over dosage may lead to unknown complications. It is better to consult a registered medical practitioner for right dosage and usage.

Currently there are no Planet Ayurveda Products that use this herb as an ingredient in them; however the below mentioned Planet Ayurveda products are useful in some conditions for which Poppy is used: