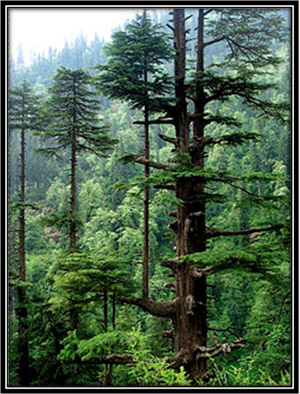 Cedrus Deodara is known as Deodar or Himalayan Cedar. In Sanskrit the name is Devadaru. Deodar is a majestic, tall tree which grows to great heights, has wide girth and lives very long. Its appearance is very beautiful.

Deodar is found through western Himalayas, ranging from Kashmir to Garhwal regions. It is mostly grown as an ornamental tree. Deodar is widely used for construction purposes. It is rot-resistant, durable and fine.

It is a huge evergreen conifer which reaches heights of 85 m. the leaves are seen in whorls. They are needle like ranging from 2-4 cm and are dark green in colour. The male cones are in the shape of a cylinder and female cones have overlapping woody placental scales. Both the cones are solitary; grow up to 12 cm in length and 10 cm in thickness. These cones are seen at the end of the branch lets. The seeds are winged, triangle in shape and are around 1.5 cm in length. The bark of the tree is thick, rough, furrowed and has vertical fissures. The wood is light yellowish brown in colour and it darkens with exposure. It is scented and contains large amounts of oil.

Bark, Heartwood, oil and leaves of the plant are used as a medicine.

Deodar oil is antiseptic in nature and is useful in relieving sores, skin diseases, ulcers and wounds. It is also useful for reducing fever, headache, piles, and urogenital diseases. It is known as antidiarrheal, carminative, diuretic, diaphoretic and insecticide. The heartwood is useful for laxative, anti-inflammatory, sedative, cardiotonic and other disorders. Leaves are acrid and bitter in taste and used for reducing inflammation.

The essential oil of Deodar is extracted by the process of steam distillation of the wood. The oil has a soothing and calming effect on the mind and it is very effective in relieving conditions associated with nervous tension and anxiety.

Besides pregnant women, who are not advised to use the products made out of Deodar bark, oil or leaves; this herb is relatively safe. However, consulting a registered medical practitioner is always better before consuming any herbal medication or supplements.

We at Planet Ayurveda use all natural and vegetarian ingredients for the manufacture of herbal products and Ayurvedic medicines. We follow strict safety regulation and maintain high standards in the preparation of all our products. We never allow our products to be tested on animals. If you want to lead a healthy lifestyle, use Planet Ayurveda products.