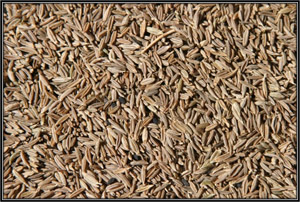 Siya jeera is the Indian name for Carum Carvi. It is also known with the common name caraway. Since the time of ancient Romans, Egyptians and Greeks it was used widely as a herb. For the past several centuries it has been used in cakes and breads and with roasted apples.

Caraway plant is indigenous to west Asia, north and central Europe. In India it is widely grown in the northern Himalayan region. It is also propagated as a winter crop in Kashmir and surrounding areas.

Caraway is a biennial, which has slender branched stems and a fleshy root. It reaches a height of around two feet. The feather like leaves are segregated into small segments and the plant produces small white flowers. It flowers during early summer season. The ripened fruit breaks into elongated narrow carpels which are pointed near the ends and curved. Four vertical ridges are seen on the surface of the fruit. The dried fruit or seeds are brown in colour, sharp and hard to touch. They give out aromatic and pleasant flavour.

Caraway seeds, roots and leaves are used as medicine in relieving various ailments.

This herb has several therapeutic properties. Some of these are:

Caraway seeds contain protein, fat, appreciable moisture, large amounts of carbohydrates. Minerals like sodium, iron, thiamine, niacin, calcium, ash and phosphorous are present. Vitamins A and C are also seen. For every 100 grams of caraway seeds, the calorific value is 465.

Essential and valuable oil is processed from caraway seeds. The oil contains large amounts of carvone. The oil is pale yellow in colour and has a strong flavour of the fruit. It contains traces of carvacol, ketone, carvone and terpene.

The oil is helpful in relieving acne, boils and other skin problems.

Pregnant women must avoid the use of caraway seeds in excess quantities. The essential oil needs to be diluted before using. Some people may show allergic symptoms and hence a patch test is advisable.

A medical practitioner should be consulted before using any herbs. We at Planet Ayurveda strive to maintain utmost quality standards in manufacturing all the herbs, supplements and Ayurvedic medicines. Our products are 100 percent natural and vegetarian. We never allow our products to be tested on animals. You can safely rely on Planet Ayurveda products for good health.