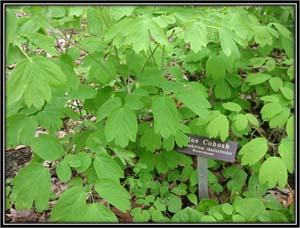 Blue Cohosh translates into ‘rough’ in Algonquin Indian. This is basically because of the rough roots of the plant.

This herbal plant stimulates the functioning of the uterus and helps in inducing pain for expecting mothers. It is also helpful in starting delayed menstruation and stops the painful muscle spasms during this period. It is an effective laxative and has the properties of relieving colic, cramps, hiccups, sore throat, epilepsy, inflammation in the uterus, joint problems as well as hysteria. The roasted seeds of this plant are used as a substitute for coffee.

The effect of Blue cohosh has been compared with that of a hormone named estrogen. It can narrow vessels that carry the blood to the heart and can also decrease the oxygen levels in the cardiac region.

The blue cohosh belongs to the family of Berberidaceae and the species of Caulophyllum. It is known to be called yellow ginseng, papoose root or squawe root in many parts of the word. This medium height perennial herb has fruits that look like blueberries and they also have bluish green foliage on them.

This plant blossoms in early spring and has flowers that taste bitter. They are found in woodlands of the mid western and eastern parts of the Unites States. They are abundantly available in the Allegheny Mountains. The rootstock of the plant is matted and knotty is used widely for medicinal purposes.

The plant has a single stalk that rises from the ground and has 3 branched leaves as well as numerous fruiting stalks. The leaflets base looks like tulips and the tip of the flower has a distinct serrate. The species have multiple compound leaves and are found in hardwood forests of United States as well.

The Blue Cohosh root that was used by American Indians and was later introduced to Native American tribes. This medicinal plant has been recognized by renowned herbalists for contraceptive and abortive purposes.

The Blue Cohosh was used by tribes for relieving problems of menstrual cramping, excessive menstruation and inducing labor. In the late 19th Century the herb was recognized as a parturient, anti spasmodic and emmenagogue. It has been repeatedly used to regulate the menstrual cycle and inducing uterine contractions.

The herb is used to relieve the following health problems:

The excessive consumption of Blue cohosh can cause diarrhea, chest pains, increase in blood pressure, and sugar levels as well as stomach cramps. This herb must not be consumed by a pregnant or nursing mother. Some tests have proven that blue cohosh can even cause birth defects in a child and even a heart attack.
According to traditional beliefs the blue cohosh is used to make child birth easier as it helps the uterus to contract during labor. As discussed earlier, this can prove to be dangerous for the child as well. People suffering from heart conditions such as angina and high blood pressure must stay away from Blue Cohosh. There are scientific evidences that prove that the herb can cause the blood vessels in the heart to contract and decrease the oxygen flow.

Diabetic patients must not use this herb as it can raise the blood sugar levels in them. This herb can also cause severe diarrhea. Blue cohosh has estrogen like properties and must not used by patients suffering from ovarian cancer, breast cancer, uterine cancer, uterine fibroids and endometriosis.

The team of Planet Ayurveda has worked to formulate the revolutionizing substitute for Blue Cohost root. This is the benefiting Female health support capsules.

We at team Planet Ayurveda are constantly working on providing the best to our clients. We use only organic and vegetarian ingredients in our products. We are proud to say that we do not practice or endorse the idea of testing the products on animals. We believe in natural therapy and hence, do not add any chemicals or preservative in our products. Try planet Ayurveda products for healthy living.