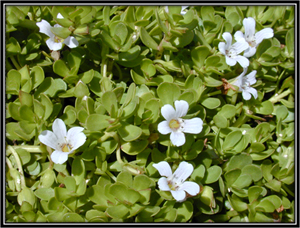 The herb Bacopia Monniera belongs to the herb family of Scrophulariaceae and goes by the botanical name of Bacopa Monnieri.

This herb is commonly known by names such as Bacopa, Brahmi, Neel Brahmi, Pennell, Water Hissop and Bacopa Monnieri.

The herb is native to India and is found in all parts of the country that are marshy or swampy.

The complete plant is used for relieving various issues of the body. When use separately, its leaves and stalks are used as ingredients for various medicines and concoctions.

The plant Bacopa Monnieri grows as a creeper and is found in marshlands. It is very effective in relieving various ailments of the body. It has been recognized as a nerve, cardiac as well as a brain reliever. It is also famously used for improving mental clarity, memory recall concentration. It gives a great boost to intelligence and confidence.

The herb Bacopa Monnieri has found many uses as a medicinal herb. It is used internally in the form of capsules, tablets, powder, tonic, potions, etc.

USE OF BACOPA MONNIERI IN AROMATHERAPY

The benefits of Bacopa Monnieri as a part of Aromatherapy are not yet known.

The herb when consumed should be taken in the exact same dose that has been prescribed by a medical practitioner. It should not be consumed in an amount that is more than required.

PRODUCTS OF PLANET AYURVEDA THAT MAKE USE OF BACOPA MONNIERI:

Bacopa Monnieri is a popular ingredient in Planet Ayurveda products. It is found in the following:-