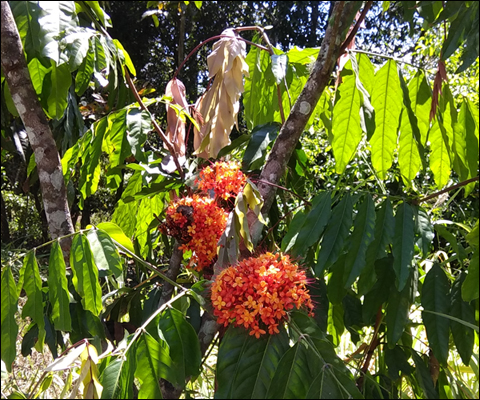 Ashoka tree is one of the widely used herbs in Ayurveda. Ashoka means “remover of sorrow” in Sanskrit. Its botanical name is Saraca Asoca and in some places it is known as Saraca Asoca as well. It belongs to the legume family.

The Ashoka tree is considered sacred in India and Sri Lanka. Because of the rich and beautiful appearance of the tree and the flowers, Ashoka tree is often seen in gardens, royal palace compounds and also temples in India.

This rain forest tree is indigenous to the Indian sub continent. It is grown extensively in the western coastal region and Central Deccan Plateau region.. The flowers are yellowish orange in colour and have good fragrance. The tree flowers between February and April. The flowers grow in bunches and turn into bright red colour before wilting. The dried bark, stem and flowers of Ashoka tree are used extensively in preparing medicines.

Ashoka is the widely used uterine tonic in Ayurvedic medicine. It has several traditional uses that support healthy reproductive system in women. It helps in controlling excessive bleeding during menstruation caused as a result of leucorrhoea, uterine fibroids and other related diseases.

SOME THERAPEUTIC EFFECTS OF ASHOKA ARE:

The bark comprises of several elements like sodium, silica, magnesium, iron, calcium, aluminum and strontium. Other components include sterol, tannins, catechol and other calcium compounds.

To preserve the medicinal properties of the herb, all the dried parts should be stored in air tight containers to protect from moisture, light and microbes.

Ashoka tree offers several health benefits and has been associated with Indian traditional medicine for various relieves and therapies.

There are no known side effects with the usage of Ashoka. As it is natural, its usage is completely safe. But sticking to the right dosage is always advised as overdose may lead to complications.

It is better to consult a qualified practitioner before administering any herb or medicine.

SOME HERBAL PRODUCTS MANUFACTURED BY ‘PLANET AYURVEDA’ CONTAINING ASHOKA ARE:

We at Planet Ayurveda follow stringent quality procedures for the manufacture of all our herbal supplements and products. We use 100 percent natural and vegetarian ingredients which are absolutely safe to use. We never allow our products to be tested on animals. If you want to regain your health, choose our Planet Ayurveda products.