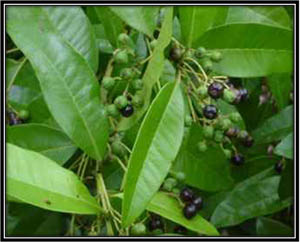 Pimenta Dioica is the scientific name of Allspice tree. It is known with several names like Clove Pepper, Pimento, Allspice, Pimenta and Jamaica Pepper. It has an odor which reminds of the combination of cinnamon, cloves and nutmeg. Hence, it is named as allspice.

It is extensively used in toothpastes, cosmetics and food flavoring. Allspice works like a purgative, tonic, antidiarrheal medicine, carminative (expels gas from the stomach) and is also beneficial in relieving disorders like neuralgia, stomachache and rheumatism.

Pimento is a strong tree which grows up to 13 meters in height. The leaves are oblong and leathery. They look similar to the leaves of Bay leaf tree. It is grown extensively in Central America, Mexico and West Indies. It is predominantly seen in Jamaica.

Allspice is an evergreen tree which has white scented flowers and red brown, scented spherical berries. Unripe and fully grown berries are plucked and traditionally dried in the sun. Later they turn into large brown seeds resembling peppercorns. In comparison to the ground powder of the berries, whole fruit has a longer shelf life and gives out more aroma.

Fresh leaves and wood of allspice tree are used for smoking meats. Essential oil is also extracted from leaves and berries. Allspice forms an important ingredient in Caribbean cuisine, Middle Eastern cuisine, and Palestinian cuisine. It is also used in America and Great Britain in desserts and cakes.

Naturopaths and herbalists use allspice for the management of the following ailments:

To disguise the taste of medicines, a tea brewed from the berries and leaves of allspice tree is added to medicines.

Ointment made from Allspice oil is beneficial in the management of muscular aches, pains and chest infections. To relive sprains, muscular pains and aches, bandages are permeated with allspice oil.

Essential oil prepared from allspice has analgesic, aphrodisiac, carminative, and tonic properties. It is warm oil useful in relieving chest complaints, rheumatism and also for preventing depression and stress.

The essential oil of allspice is used in aftershaves, deodorants, perfumes and commercial food flavouring.

Allspice berries comprise of 60 to 80 percent eugenol, 1 to 4 percent of a volatile oil. The leaves of this tree contain more eugenol, up to 96 percent and resemble the chemical composition of clover leaf oil. Eugenol has local anesthetic, antiseptic and antioxidant properties. It is a natural product which contains beta-carotene, vitamins C, B1, B2 and A, riboflavin, niacin and thiamine.

Allspice is widely used for relieving various ailments. Some of these are:

Though allspice is proven for its benefits, extracts of allspice plant can irritate the mucous membrane. Consumption of more than 5 ml of allspice oil may result in vomiting, nausea, convulsions, depression and affects central nervous system.

Precaution should be taken while using the allspice oil. It may cause skin irritation if used in more quantities.

PLANET AYURVEDA PRODUCTS THAT USE ALLSPICE

As of now there are no products manufactured by Planet Ayurveda using Allspice. But similar products which are used with the same purpose are mentioned here.

It is always better to consult a registered practitioner before consuming and using any of the herbs. We at Planet Ayurveda provide the best advice regarding management, supplements, herbs and Ayurvedic medicines which are made from 100 percent natural products. All our products are made without any chemicals and preservatives.

Our products, herbal supplements and medicines are vegetarian and the best quality herbs are used for preparing the formulations. Our products are not tested on animals. Choose Planet Ayurveda herbal products and reap the benefits of good health.