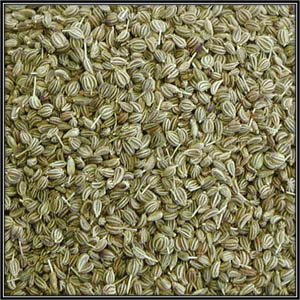 Trachyspermum Ammi is the botanical name for Bishop’s weed. In Hindi it is known as Ajwain. The Sanskrit name is Agnivardhana or Yavanika. Medicinally the herb has been used in traditional Indian medicine since ancient times. Renowned Ayurvedic physician Charaka advocated that this herb is useful in relieving uticaria and has anticolic and antiflatulent properties.

Ajwain has an aromatic smell and pungent taste. It is mainly used in curries, biscuits, beverages, confectionery and pickles as a spice. Crushed ajwain seeds are used in potpourri and scented powders.

It has originated in the Mediterranean regions and is predominantly grown in India, Iran, Iraq, Pakistan and Afghanistan. It is also cultivated in central Asian countries, China and Africa.

The plant is erect, annual herbaceous and grows up to 90 cm tall. Leaves are distantly placed with linear segments. The flowers of the plant are small and white in colour. Fruits of the plant are used as seeds. They are oval and around 2-3 mm long with grayish brown colour. The seeds have distinct ridges and a tubercular surface. Ripe seeds are dried and threshed to be used as a spice and a herb. The essential oil extracted from the seeds is yellowish orange in colour with a spicy flavour which resembles the smell of thyme. Part of the plant used as a herb are the seeds and the oil.

Ajwain seeds consist of about 50 percent thymol, an essential oil which has powerful anti-spasmodic, germicide and fungicide properties. Thymol is used in perfume and tooth paste industries. For relieving disorders like flatulence and diarrhea, ajwain is steeped in water and used as a medicine.

Indian households store ajwain and use it as a remedy for colic and indigestion. It is used in poultices for relieving arthritis and asthma. Ajwain is also known to have aphrodisiac properties.

The undiluted oil of ajwain seeds irritates skin and mucous membrane. Pregnant women are not supposed to consume products which are high in thymol content. It is better to take the advice of a registered practitioner before consuming any herbs or herbal products.

PLANET AYURVEDA PRODUCTS THAT USE AJWAIN

We at team Planet Ayurveda are working tirelessly to provide only the best to our clients. We are constantly working to innovate and discover the natural medicines available. Our researchers are studying various herbs and are analyzing them thoroughly. Each product from the company is examined under strict quality standards by expert herbalists. We do not use any preservatives in our products. We believe in a naturally healthy lifestyle.